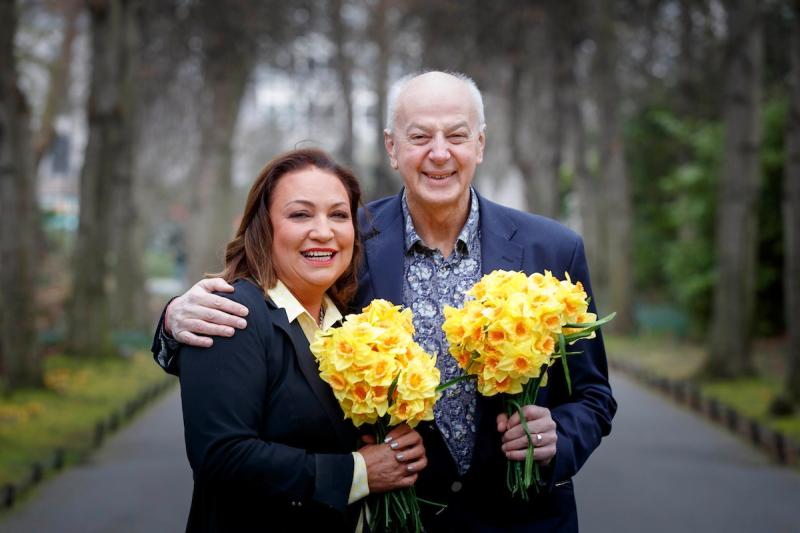 Bobby Kerr and Norah Casey are urging the business community in Longford to show their support for cancer patients by getting involved in Daffodil Day on Friday, March 23.

Both have experienced cancer in their lives and Norah’s husband also tragically died from cancer.

On Daffodil Day, proudly supported by Boots Ireland, businesses in Longford can help raise funds by hosting a fundraising event at work or by volunteering to sell daffodils.

Broadcaster and successful businessman Bobby Kerr was diagnosed with mouth, head and neck cancer in 2015. The cancer was caught early and after chemotherapy and radiotherapy treatment he got the all clear.

He said, “Every year 40,000 people hear the dreaded words ‘you have cancer’. In 2015, one of those people was me. Thankfully years of cancer research had developed smart ways of treating the disease and this ultimately saved my life. I’m one of the lucky ones. On March 23, companies in Longford can get involved and help save more lives from cancer.”

Norah Casey had a tumour removed from her breast several years ago and her husband Richard tragically died from aggressive kidney cancer. The broadcaster and leading Irish businesswoman said, “Richard dying just months after his diagnosis was devastating, and sadly many people in Ireland go through the grief of losing a loved one to cancer. This year approximately 9,000 people will die of cancer in Ireland. But progress is being made in the fight against cancer and Daffodil Day is the day where you and your colleagues can make a real difference to the lives of people affected by cancer. Get involved now at www.cancer.ie. Your support saves lives.”

Chief Executive of the Irish Cancer Society Averil Power said, “Since 2010, the Society has invested over €25million in cancer research making us the leading voluntary funder of cancer research in Ireland. This investment, funded 100% by donations, is greatly improving how we diagnose and treat cancer. Survival rates have risen. Six out of ten people are now surviving cancer for five years, compared to four out of ten in 1998. With your help we want to make this ten out of ten.”

Bernadette Lavery, MD, Boots Ireland said: “This year we are ramping up our efforts to fight back against cancer by sponsoring the Society’s flagship fundraising day. Colleagues in Longford are excited to get behind Daffodil Day on Friday, March 23 and make a real difference to cancer patients and families across Ireland.”

To get involved register at www.cancer.ie/ daffodildayatwork, or contact the Corporate Partnerships team on 01 231 6625 or corporate@irishcancer.ie

ALSO READ: Ballinalee's John Connell hoping to 'trump Trump' as book reaches no. 2 in the charts