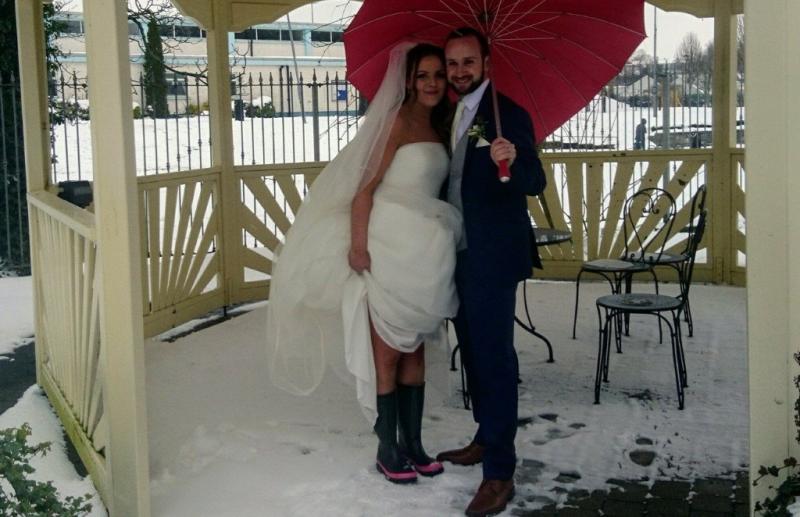 Storm Emma brought the country to a standstill last week, but it is definitely fair to say that love conquered all for the wedding of one Offaly couple at the Annebrook House Hotel in Mullingar.

Shane and Sandra Ryan from Tullamore had spent months planning their big day for Friday, March 2, but the elements seemed to have other plans. "It was a bit of a dramatic week for sure," Shane told iRadio this week.

The storm dropped over a foot of snow over the Midlands with some parts experiencing 8ft snow drifts, resulting in a series of problems for the couple.

Thinking ahead and expecting the worst of the weather on Thursday night as the country was under a Status Red weather warning, Shane and Sandra checked into the Annebrook on Thursday, as did their dedicated photographer, Sibel Ozben Geraghty from Masters of Photography.

It was the next day when pandemonium set in. The bride’s hairdresser couldn’t travel due to the treacherous conditions, the celebrant for the civil ceremoney was snowed in, and the guest list was dwindling fast. "When vendors and guests started cancelling, panic set in," Shane said.

However, the staff at the Annebrook stepped up to the plate and re-organised a lot of the suppliers, including a new celebrant who was picked up and brought to the venue by tractor. "The Annebrook were brilliant all week. Anything that went wrong, they tried to sort it for us," Shane commented.

Managing Director Berty Dunne did some of the rescuing and said the back of the car was all over the road as they tried to piece everything back together for the bride. Guy Clothing from Tullamore also went above and beyond through the snow to get the wedding suits to Shane and his wedding party.

In the end, the wedding went ahead, and despite the guest numbers falling from 160 to 20 at one point, 80 of Sandra and Shane's nearest and dearest managed to get to the Annebrook for their big day in the end. "In the end it was fantastic. It wasn't exactly as we had originally planned, but it turned out to be a truly brilliant day," Shane said.

The resulting photographs are certainly once in a lifetime with Sandra and Shane posing in the knee-deep snow at the hotel. The bride even donned wellies while the groom got busy with a spade.

Shane and Sandra are now happily married and have a hair-raising, madcap story to tell for years to come about the day they got married during the worst snow storm Ireland has ever seen.