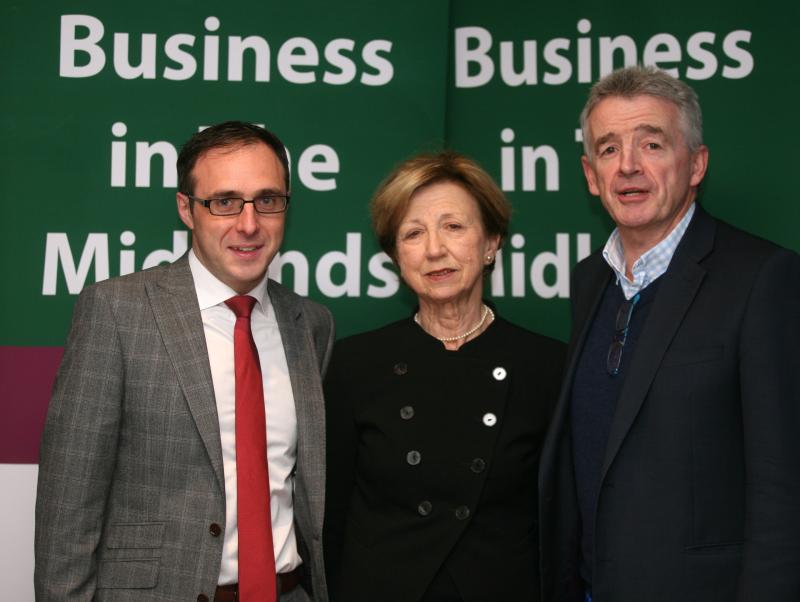 Ryanair CEO Michael O’Leary this morning told a gathering of 600 business leaders that lowering the cost of access to Ireland is crucial to the success of our business and tourist sectors in the post-Brexit era.

Mr O’Leary was addressing a special ‘Business in the Midlands’ briefing in Mullingar, organised by local TD Robert Troy to highlight the benefits of the region, in particular the ‘Midlands Gateway’ towns of Mullingar, Athlone and Longford, to potential business investors.

Taking up Deputy Troy’s point that the midlands is one of the most accessible regions of Ireland, Mr O’Leary said that Ryanair is reducing the cost of flying by some 15% this year to target more business customers. He also commended the Government’s decision to scrap the travel tax.

Midlands “can be economic powerhouse”

Today’s event was organised by Robert Troy TD, who serves the constituencies of Longford-Westmeath and who told the gathering that the midlands has the potential to be an “economic powerhouse”.

Deputy Troy said, “Anyone who lives and works in the midlands understands the unique benefits of the region.”

He added, “This is one of the most accessible parts of the country with an outstanding road and rail network, plenty of available space for companies to set up and expand, as well as a ready supply of young, educated workers thanks to the Institute of Technology in Athlone.

"We also have a range of extremely valuable tourism assets and attractions, with Center Parcs having committed to an investment of some €250 million to create the new Longford Forest facility.”

Traffic to Ireland up 40% in past five years

Mr O'Leary outlined, “We live on an island on the periphery of Europe and yet we were taxing people to come here which is a pretty dumb economic policy.”

Mr O’Leary addressed the Brexit controversy, claiming that most British people and even politicians have no idea what Brexit is going to look like.

“Britain is in a difficult position over Brexit and they have no idea where it is going,” he said. “They are in danger of running themselves off the edge of a cliff in the next couple of years and we’ll all suffer.

“If Britain does decide to go ahead and leave, they will have no negotiating power so the other EU countries will be very hard on them,” he claimed. “That will ensure a hard Brexit with very slow growth over the next two years, which would be deeply damaging for both the UK economy and the Irish economy – certainly for Irish tourism which depends hugely on UK visitors.”

Still a chance that UK will “double back” on Brexit

“There is still the possibility that Britain will double back on Brexit,” he said. “Maybe politically they will leave the EU but opt to stay in the single market; either way it’s going to be hugely challenging for Ireland to deal with.”

Addressing the audience of local business people, Mr O’Leary said that while access to the midlands was very good, there is still a pressing need for a new motorway – the M60 – while the quality of rural broadband needs to be improved.

“Aim high,” he told the many SMEs represented at the event. “All businesses were once small businesses.” Highlighting the midlands’ business credentials, he pointed out that Mullingar is the only town in Ireland that has produced two CEOs currently among the top 10 PLCs in the country (Ryanair and Paddy Power, whose CEO is Brian Corcoran).

Praising the quality of education in the midlands region, Mr O’Leary also said it is vital that standards are maintained to ensure a ready supply of talent, particularly in the technology sector.

“Encourage your children to get into IT,” he concluded. “They’ll never be out of a job!”

Mr O’Leary, who lives in Westmeath, is a long-time supporter of enterprise in the midlands. He is known to support a number of local charitable organisations, and has often spoken of his decision to live and raise his family in the area.