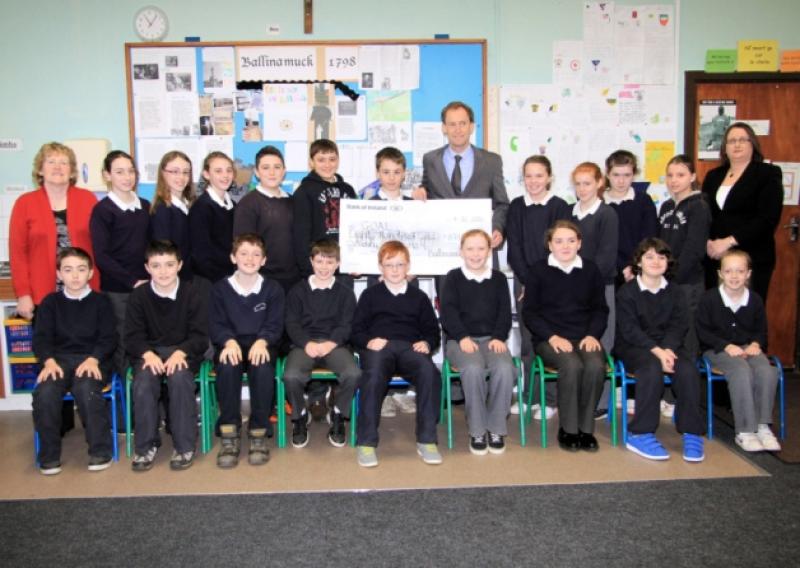 Longford people are among the most generous in Ireland when it comes to GOAL donations, with €25,000 raised in recent months by GOALie Tiernan Dolan.

Longford people are among the most generous in Ireland when it comes to GOAL donations, with €25,000 raised in recent months by GOALie Tiernan Dolan.

These sentiments were echoed by GOAL’s CEO, Barry Andrews who was in Longford last week, where he paid a visit to the pupils of Ballinamuck National School who raised funds for the Philippines. He also launched the two local GOAL Miles in Longford town and Strokestown.

GOAL is an international humanitarian agency dedicated to alleviating the suffering of the poorest of the poor. It is a non-denominational, non-governmental and non-political organisation and was founded in Dublin in 1977 by John O’Shea.

Since last July, Longford town native, Tiernan Dolan has been working tirelessly to raise money for those worst affected by the civil war in Syria and lately, those affected by Typhoon Haiyan.  According to Mr Andrews, Mr Dolan is responsible for funding of over €25,000, all of which he raised from July to December of this year. €15,000 of that has been donated to GOAL’s relief effort in the Philippines.

“The people of Longford have raised €15,000 and the children in Ballinamuck NS raised €871,” the CEO continued. “Longford is one of the most generous county’s in Ireland and of course there are the two GOAL Miles in this area that are very successful fundraisers as well.”

It has now also been established that without the support of GOAL in the Philippines, “a lot more people would have died”, added Mr Andrews. “This is the very early stages of recovery, and there are so many evacuation centres that desperately need help and support at this point. Aid works, and that is what we will continue to do, and GOAL will also assist with disaster preparedness.”

Aer Lingus provided a jet to GOAL in recent weeks so that the organisation could transport produce to the worst affected areas in the Philippines, areas where people have no water to drink or no shelter.

“We want to get the boats back on the water and help people to grows crops again,” said Mr Andrews. “Our aim is to provide the finance and expertise and to link in with local NGOs so that we can identify who is affected.”

The €25,000 that Mr Dolan raised has had a leverage effect for GOAL, meaning that international Governments have donated millions of euros to the organisation on the back of it.

“Governments see that the organisation has the ability to provide necessary aid, expertise and finance, and collateral such as that from Tiernan has horsepower in relation to government spend on aid,” added Mr Andrews.

GOAL is also assisting with the relief effort in Syria, where, according to the UN, more than 2 million people have fled the country. Since the start of unrest in March 2011, more than 100,000 people have been killed in the conflict and the northern city of Aleppo - Syria’s commercial capital - has become a battleground that has suffered extensive bloodshed. “The problem in Syria is the political structure there and GOAL’s job is to put the politics to one side and deal with the humanitarian crisis,” the organisation’s CEO continued. “I have been to Syria and it is a beautiful country; middle income with a lot of potential, but it is also very dangerous. It is for these reasons that local fundraising is so important. It is absolutely vital, and I also feel that Irish people have something to bring to these conflicts because of our own difficulties; what GOAL wants is a world without poverty.”

So, with an extensive background in politics, having served as a Fianna Fáil TD and Minister for Children, how has the transition from political life to head of a humanitarian organisation been for Barry Andrews?

“Well I am still very plugged in to the political scene,” he laughed, adding that his background has become an invaluable tool in his role as CEO of GOAL.

“I suppose I look at politics now from a more detached place, but after I lost my seat, I went back to the Bar and studied children’s rights, etc and my exposure in politics has been invaluable to GOAL, particularly in the areas of policy and inclusion.”

And with regards to the future? “I have a four year contract with an organisation that has a turnover of €80m, so it has been an exciting year and will continue to be,” Mr Andrews added.

“What’s important is the impact that money has, and all the indications are that GOAL is doing the work. It is a very professional sector and is a steep learning curve for me and GOAL still has a lot of work to do in terms of its reputation.”

Since its inception, GOAL has spent in excess of €790m on humanitarian programmes in more than 50 countries. Over 2,800 GOALies and many thousands of local staff have worked in the developing world on GOAL’s behalf and the organisation has responded to every major humanitarian disaster since 1977.

Typhoon Haiyan was 300 miles across when it struck the Philippines on November 8, and is now regarded as one of the most intense tropical storms ever to make landfall anywhere in the world.

As a direct result millions of people have been displaced, and as Mr Andrews alluded to “the worst affected areas have no schools, no food, no shelter and no water”.