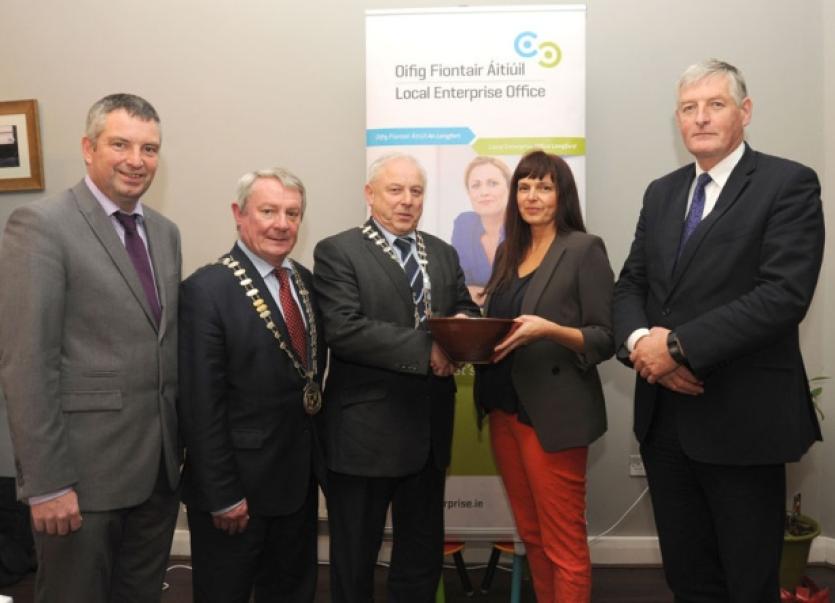 One of the highlights was the County Enterprise Awards and Networking Event which took place on Thursday at County Longford Golf Club.

The event was well attended with guest speakers Joan Mulvihilll, CEO of Irish Internet Association and Paul Bond, owner of brixworkwear.com, treating the audience to their experiences of business and the internet.

Representatives from the three finalist businesses for the County Enterprise Awards were present on the night and each were presented with a beautiful piece from Thomas Lynam Ceramics.

The three finalists were Wendy Louise Designs, Shipmytribike and N&E Precision with N&E Precision being awarded the overall prize.

On Tuesday last LEO Longford, in association with Longford Women’s Link and the Longford Women in Business Network, hosted a Women in Business Event at the Sin Bin Event Centre. Guest speakers on the night were Róisín Hogan, BBC The Apprentice finalist and owner of Híró by Róisín and Helen James, judge on RTÉ’s Home of the Year and designer of Dunnes Stores’ Considered range.

A number of workshops were also held throughout the week where local businesses could avail of mentoring sessions in Idea Generation, Website Clinics, the Online Trading Voucher Scheme and LEO supports.

On Tuesday, the Student Enterprise Awards were launched in The Backstage Theatre to a large audience of Transition Year students from five Longford secondary schools.

Gerry Duffy spoke to the students on motivation and goal setting and talked about his great sporting achievements. Róisín Hogan also spoke about her experience in an enterprise competition through The Apprentice.

The IBYE Bootcamp as part of the Ireland’s Best Young Entrepreneur competition also kicked off on Thursday last.

Nine young Longford entrepreneurs have made it through to the County Final. Three winners will be selected from this group to share in a prize fund of €50,000.

On Friday LEO Longford launched its Autumn Training and Mentoring Programme. Courses will be offered in “Retail Renewal”, “Starting Your Own Business” and “Social Media Marketing”.

Readers are encouraged to sign up for the range of short courses on LEO Longford’s website: https://www.localenterprise.ie/Longford.