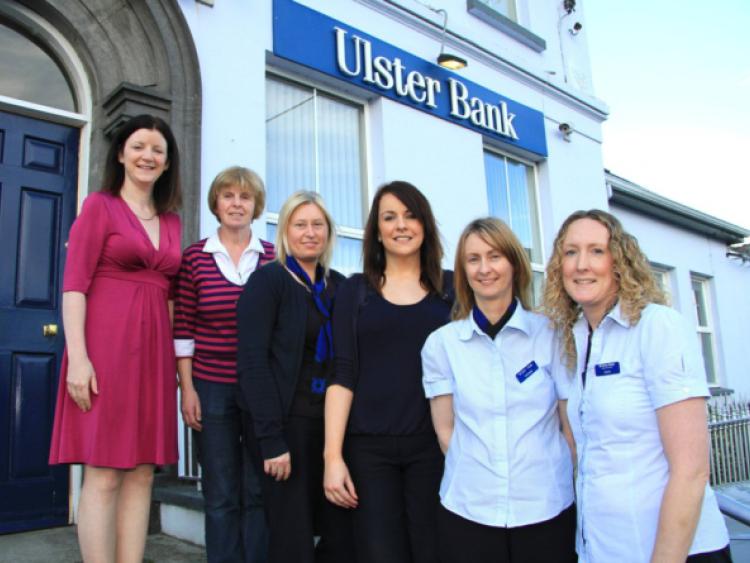 Glum and despondent were probably the two words to take from a sombre Granard last Friday as Ulster Bank finally brought the curtain down on its 145 year-long association with the north Longford town.

Glum and despondent were probably the two words to take from a sombre Granard last Friday as Ulster Bank finally brought the curtain down on its 145 year-long association with the north Longford town.

Though its formal closure had been known since July, that failed to curb an overriding sense of public annoyance at the decision.

One after another, customers spoke about the impending closure as they completed their final transactions at the bank last Friday afternoon.

Local woman, Brid Kiernan said she was a loyal customer of the bank’s Granard branch for over two decades, following in the footsteps of her own father.

“I’m very sad to see it go and it’s such a pity really because it was always busy,” she said.

“Anytime you ever went in there was always people coming and going.

“When Castlepollard and Kilcogy closed they (customers) all came here, so it was great for the town but that’s all gone now.”

The same sense of frustration was one which was etched right across the face of pensioner Dee Clarke.

A regular attendee at the bank for the past 25 years, she said last Friday was a day she had been very much dreading.

“My daughter could come in and get my pension, or get some money out of the whole in the wall. Now I have to go to Edgeworthstown.”

If they were a poignant, if somewhat resigned outline of what was to come, the dejected look on the face of another bank customer, Leona Leahey spoke volumes.

She said because of her long working hours, the accessibility of Granard had been particularly advantageous.

All that, following last Friday’s final day of trading was about to change, she admitted.

“It’s ridiculous because I work 8am-8pm most days during the week. You have no time to go to any other bank.