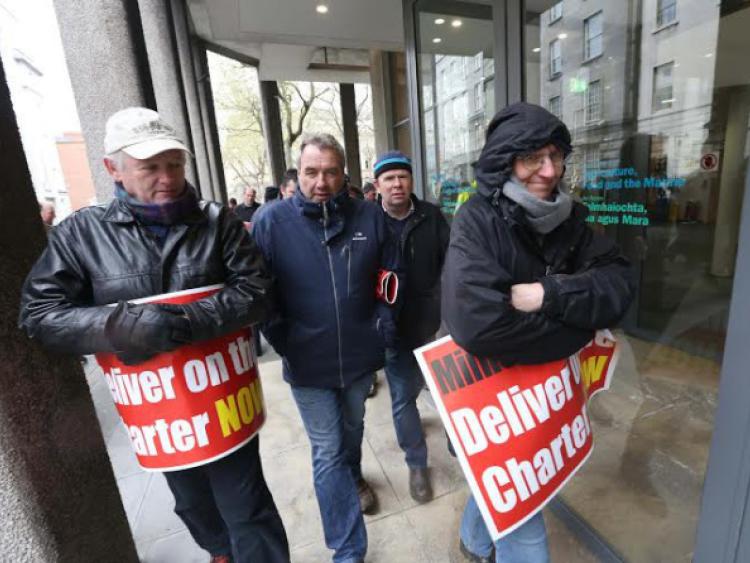 Longford farmers protested outside the office of the Minister for Agriculture, Food and the Marine last week.

Longford farmers protested outside the office of the Minister for Agriculture, Food and the Marine last week.

The protest was held to highlight the opposition by the industry of the delay in finalising a new Charter of Rights for farmers.

IFA Deputy President, Tim O’Leary, said farmers were promised a Charter to coincide with the implementation of the new CAP, which commenced earlier this year.

“Farmers are extremely frustrated with the lack of progress from Minister Coveney in finalising a new Charter of Farmers’ Rights,” he added.

Mr O’Leary went on to say that the failure of the Minister to act, had allowed the negotiations on the new Charter to get bogged down on inspections, with no movement by the Department.

“Minister Coveney has to intervene in this logjam,” he pointed out before adding, “The Minister must resolve the key outstanding issues, and insist that a new, improved Charter is implemented without further delay”.

IFA is demanding that the new Charter incorporates fair notice of inspection; the elimination of duplication; a reduction in overall inspections and increased tolerances and a new yellow card system for unintentional non compliances.

“Farmers have become increasingly frustrated at the burden of bureaucracy, unannounced inspections, land eligibility and other penalties being imposed by an inflexible and unfair EU regime,” said Mr O’Leary.

“While progress has been made on many issues, including improved payment deadlines, farmers patience with the process has run out because of the failure of the Minister to take a hands-on approach to resolve the inspection issues.”