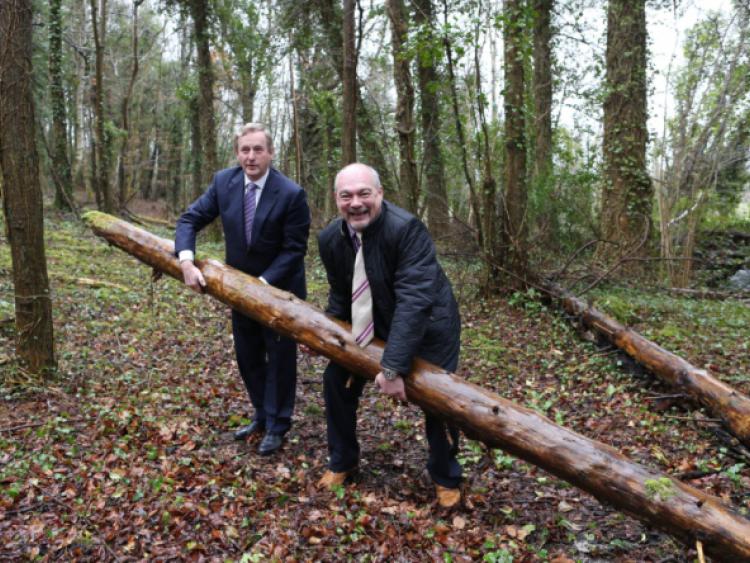 At the announcement of the €200 million Center Parcs investment this morning that will result in 1,750 jobs, An Taoiseach Enda Kenny predicted that Longford will become a leading tourist destination. Here is his speech.

At the announcement of the €200 million Center Parcs investment this morning that will result in 1,750 jobs, An Taoiseach Enda Kenny predicted that Longford will become a leading tourist destination. Here is his speech.

“I am very pleased to be here this morning to welcome the announcement from Center Parcs of their plans to develop a forest holiday village here in Ballymahon, Co Longford.

Just a short while ago I had the opportunity to visit the peaceful surroundings of Newcastle Wood and it is the perfect setting for this new state of the art holiday village.

This Center Parcs Village is expected to open in 2019, pending planning, and will create 1,000 permanent jobs onsite in addition to the 750 jobs during the construction phase. 1,000 jobs for Longford. The majority of them to be filled locally with many roles filled by employees between the ages of 16 and 24. This is the potential of tourism in Ireland.

I spoke of this last week when I launched the Government’s National Tourism Strategy. Tourism can deliver jobs and investment into every part of Ireland. Thanks to this investment Longford will become a leading tourist destination in Ireland.

Of course Deputy James Bannon has already been telling me this for years and I don’t think Center Parcs will find a more enthusiastic and positive advocate for the company within Government.

Martin [Dalby] has told me of his plans to build up to 500 lodges in this €200 million investment, which will have the capacity to accommodate 2,500 guests.

Center Parcs have estimated that the new Village will inject approximately €32 million per annum into the Irish economy which is also very welcome.

Center Parcs are a household name in the UK where they provide a quality experience to thousands of holiday makers every week.

It is a fantastic sign of the popularity of Center Parcs that they manage an annual occupancy rate in excess of 97% across its UK villages.

Importance of the Tourism Industry

This exciting development by Center Parcs is a big investment in Irish tourism. It comes on the back of a strong recovery in the tourism sector following the implementation of a suite of pro-tourism policies by this Government.

As a result, last year was a record year for tourism. There were over 7.6 million overseas visits to Ireland, up almost 9% compared to 2013.

Last year was the best ever year for visitor numbers from North America, Germany, France and Spain. Visits from Great Britain were also up by 8%.

I am very confident that the outcome in 2015 will be even better. Early indications point to 2015 as another record year for tourism.

These visitor numbers reflect the fact that Ireland as a destination is continuing to improve and is becoming more attractive.

Anyone who is an outdoor enthusiast will know that Ireland has a huge amount to offer.

This is why the development of new tourist attractions like this Center Parcs Village and projects like the Wild Atlantic Way are going to play a key role in putting Ireland back on the map.

The development and marketing of new greenways, cross country walking routes, the growth of water sports like surfing, sailing and diving are all adding to the appeal of Ireland as the number one choice for activity holidays.

The National Tourism Strategy launched last week represents the Government’s commitment to supporting the continued growth of tourism as a source of nationwide jobs and growth.

We are setting ourselves three clear goals for our tourism industry – by 2025 we will see:

· ten million overseas visits to Ireland a year, compared to 7.6 million in 2014.

This investment by Center Parcs comes at an important time in Ireland’s recovery.

Today, thanks to the sacrifices of the Irish people and the decisions taken by Government I can say with confidence that the economic recovery has taken hold. 90,000 new jobs have been created since we launched our Action Plan for Jobs in 2012. Yesterday unemployment dropped to 10%.

This is possible because Ireland was the fastest-growing economy in the EU last year, and the European Commission forecasts the same again this year.

Government borrowing is falling rapidly, from a peak of €22 billion in 2011 to around €5 billion this year – and we are on track to reduce the deficit to well below 3% of GDP this year. These positive developments have not happened by chance. They are the result of the sacrifices made by the people of Ireland, and they are down to the policy decisions taken by this Government.

We have stressed throughout our term that recovery has to be sustainable. I do not want to see any return to booms and busts.

That is why this month, in a Spring Economic Statement, we will set out the pathway to be followed in the years ahead to secure the recovery by carefully managing the public finances and to deliver sustainable, full employment by 2018.

This development and its 1,000 jobs is fantastic news for County Longford and the midlands. The development of the holiday village will provide a massive boost to the area and contribute significantly to the local and regional economy. I wish Center Parcs, Deputy Bannon and the people of Longford every success with this new and fantastic development, and look forward to seeing it prosper and deliver for county and country.”