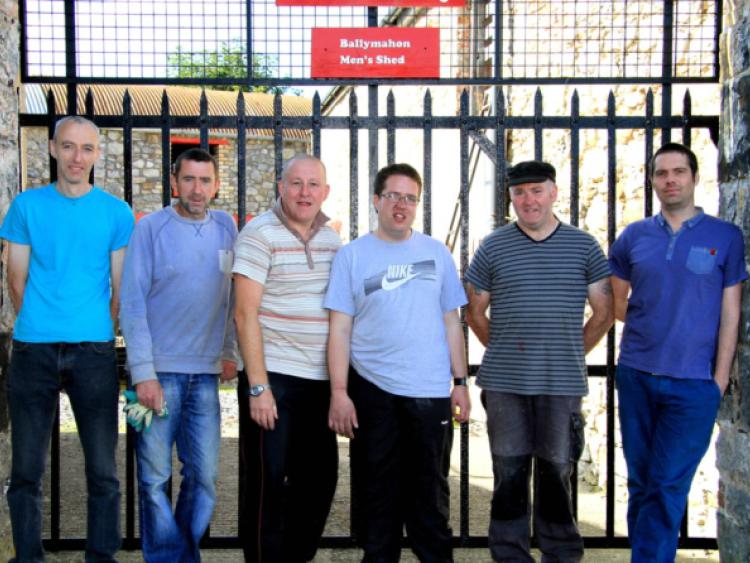 The men of Ballymahon are a force to be reckoned with, it seems - well at least since the Men’s Shed group was established.

The men of Ballymahon are a force to be reckoned with, it seems - well at least since the Men’s Shed group was established.

Since its inception in 2011, the group has gone from strength to strength and the men are currently renovating a space in the heart of Ballymahon town for their base.

When the Longford Leader caught up with them last week in the glorious sunshine, members were busy restoring Nally’s Yard where they are laying new cobblestone floors and restoring a space from which they plan to operate in the months and years ahead.

“It’s three years now since we set up and it has been very worthwhile,” said Charlie McMonagal, adding it all started when a number of men participated in some adult learning courses with the Longford/Westmeath Education and Training Board (ETB).

“We were doing various courses - maths, horticulture - and then we decided to branch out from there and try and create our own workshop.”

And create they certainly did, because the Ballymahon Men’s Shed became a hive of activity as the group established themselves at the Bridgeways Centre. Operating from there, members became more involved in the community.

To date, they have been involved in the creation of signage to mark significant heritage sites in the area and developed a very successful initiative that assisted older members of the community. “The Home Help Gardening project was very successful,” continued Mr McMonagal. “We began by advertising locally, the fact, that we were available to call to houses and carry out work or gardening. We then linked in with the local senior citizens group and out we went and did various jobs that needed to be done around their homes.”

In the meantime, John Nally provided the men’s shed group with a space in the town which they are currently restoring. Known locally as Nally’s Yard, the area is similar to that of an old stable yard that boasts plenty of sheds and open space. It also requires plenty of restoration work to get it up and runnig, so the group are slowly but surely making the place their own. “There will be a cafe at the front and then here at the back we will have an office and a canteen upstairs so that we can have our own food and have a chat,” added Mr McMonagal.

The men are operating from Bridgeways and food is provided there on a daily bases. “We want to make something of this area as well as restoring it.”

There are currently seven or eight members in the group and if plans are to come to fruition, more men will be required and new members are always welcome.

Mr McGonegal is a stonemason by trade, so he is currently passing his skills onto members and it’s hoped that invaluable skills like this, will be passed down through the group. “Our main focus is to become part of the community and to help members of the community in any way we can,” the local stonemason continued. “The council has a plan for the Mid-Shannon Wilderness project and we are involved in mapping sites of historical importance for the map. We will also be involved in the signage for that as well. It’s all about planning for the future as a community and we are delighted to be part of all that.”

Service users from Red Leaf Day Services in association with Rehab also participate in the Ballymahon Men’s Shed and clients of St Christopher’s Services in Longford town will also join forces in the new year.

Rory Gallagher is the manager of Bridgeways. “We are always looking for new members and those who are interested will be most welcome,” he added.

The Men’s Shed initiative is a non-profit organisation that originated in Australia to advise and improve the overall health of all males.

The initiative normally operates on a local level in the community, promoting social interaction and aims to increase the quality of life for members.