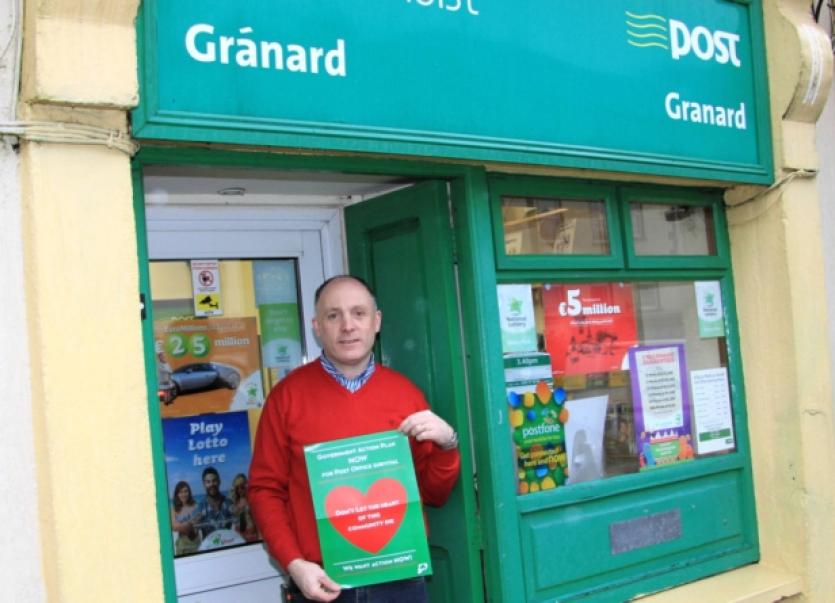 The Irish Postmasters Union has demanded a Government action plan to ensure the sustainability of the post office network.

The Irish Postmasters Union has demanded a Government action plan to ensure the sustainability of the post office network.

“If the government doesn’t take action, all post offices in County Longford will be under threat,” claimed the union’s vice-president Padraig McNamara, who is also the postmaster at Granard post office.

In 2012, a Grant Thornton Report commissioned by the IPU demonstrated that the Government could make savings of up to €76.8 million if motor tax, banking charges and hospital charges were payable through post offices. However, no action has been taken at Oireachtas level to implement these facilities.

“ Savings of around €60 million could be made through motor tax alone,” Mr McNamara said.

The IPU representative added that the Government has ignored the findings of this report and has instead pursued policies which are driving business away from the post office network.

“While An Post has retained the Social Welfare payments contract for a possible six-year term, this is only a temporary respite,” Mr McNamara explained.

“We’re already seeing evidence that the Department of Social Protection is forcing people into banks. If that continues, as is part of their plan, and if we lose the State Savings, the network cannot survive as it would amount to a loss of 60 per cent of income.”

Such a scenario would strike a killer blow to rural communities, he continued.

“We’ve seen it in England, where the number of of post offices was reduced from around 17,000 to something in the region of 9,000. Now the government there is having to invest money in rejuvenating the communities where the post offices were closed down because it ripped the life out of those areas.”

The postmasters’union has arranged a gatherin g of its members outside Leinster House for Wednesday, February 26, when a Dáil motion tabled by members of the Technical Group of TDs will be voted on.

“We’re expecting around 400 or 500 of our members to be outside the Dáil that day,” Mr McNamara revealed. “The Government has to make a clear policy decision; what we’re looking for isn’t unreasonable.”

The IPU vice-president encouraged anyone concerned about losing of their local post office to make their feelings known to their political representatives.

“The community should have a voice as well,” he concluded.