Winners of novel competition
to kayak the 10km Camlin Loop 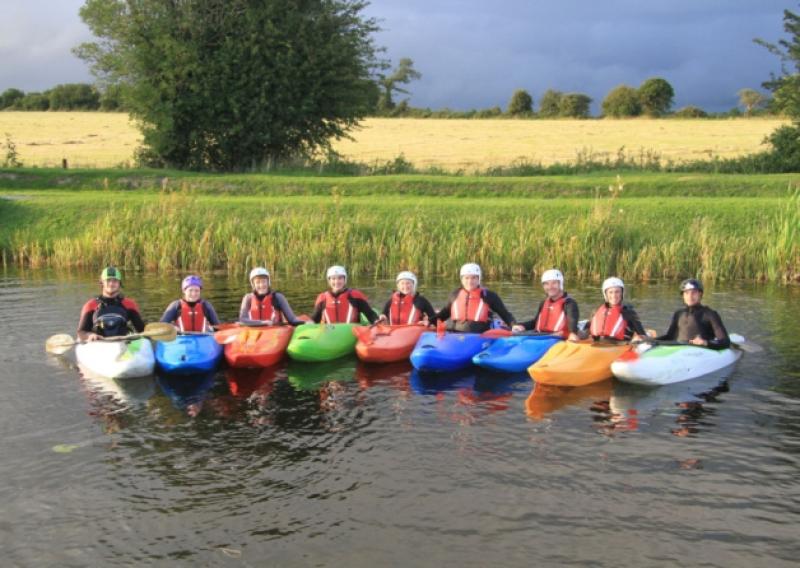 There was an air of nervousness tinged with excitement on the banks of the canal at Ballymahon last week when the winners of a novel competition took to their kayaks for the first time.

There was an air of nervousness tinged with excitement on the banks of the canal at Ballymahon last week when the winners of a novel competition took to their kayaks for the first time.

The competition, run by Waterways Ireland, in conjunction with the Brendan Farrell Show on Shannonside Radio, gave away a very unique prize - training for a 10km paddle around the Shannon Blueway Camlin Loop in just over two weeks’ time.

“Waterways Ireland are encouraging everyone living near the Shannon Blueway to get out and experience this wonderful multi-activity route either by walking, running or paddling before the end of summer,” said Katrina McGirr from the organisation’s communications and marketing division.

The 10km Shannon Blueway Camlin Loop was opened with much fanfare earlier this year and while it has been popular this summer, it still remains somewhat of a secret. The 10k paddle on September 12 will form part of a fundraising Fun Day for Irish Autism Action.

One of the competition winners who could be seen donning her wetsuit along the banks of the Canal outside Ballymahon last week was general election candidate, Barbara Smyth.

The Dubliner, who now resides in Newtownforbes admitted she was quietly looking forward to the challenge.

“I saw the promotion on Facebook and having being kayaking last year with my children in Killashee I thought it was a fantastic idea,” she confided, as the storm clouds began to gather threateningly overhead.

A seasoned triathlete, the former Longford News journalist said his decision to enter was two-fold.

“I have d one a lot of adventure races and triathlons and this (kayaking) is in or around the same thing,” he maintained.

“Caneoing 10km is a challenge and it will be all upper body but it’s for a good cause too -Autism Ireland.”

“We will probably be half a day doing it but you couldn’t be anywhere nicer on an evening like this with the canal and lots of beautiful scenery around.”

As instructor Rory Moorhead from local firm outdoordiscovery.ie offered a brief run-down of how to properly steer a canoe, Leitrim’s Eamon McCarthy said he was just hoping to keep his head above water during the group’s introductory class.

“I have done two adventure races and ended up in the canal in both of them,” he chuckled away to himself.

If you paddle you can join in the 10k Paddle on September 12, Clondra at 10am-1pm. Otherwise you can ‘Try Paddling’ with all the family in the harbour on the day. Irish Autism Action are running a 4 mile run/walk, a 1m walk for Autism and a penalty challenge with loads of family entertainment on the day. To register to run, walk or paddle on September 12 (€20 for an individual or €25 for a family) click http://bluewaysadventureforautism.gr8.com/