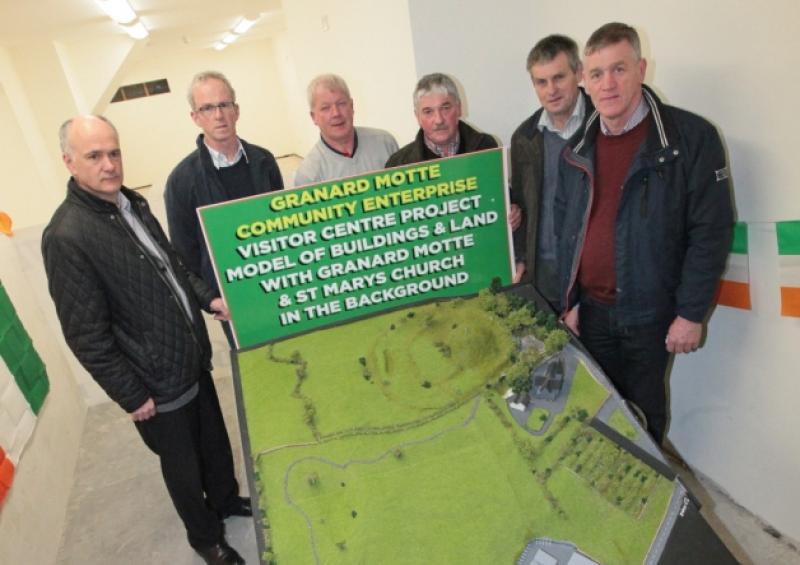 Granard’s economic future looks set for a major shot in the arm after a local enterprise group secured a 15 acre site for the purposes of a large-scale visitor interpretative centre.

Granard’s economic future looks set for a major shot in the arm after a local enterprise group secured a 15 acre site for the purposes of a large-scale visitor interpretative centre.

The deal, which includes two commercial units, was signed off in recent weeks for €265,000 following an extensive local fundraising campaign.

Those efforts , coupled with an LCRL funded €15,000 feasibility study being carried out, enabled the group to secure a €175,000 mortgage to buy the site.

Now, the committee behind the project, have set their sights on bringing the venture to the next and all important development stage.

The Leader met with committee members in Granard last week to discuss their vision for this ambitious and innovative project.

The air of excitement about the project is palpable . The committee members are the first to admit that the support and enthusiasm of the local community has been a key factor in getting the project this far.

“ We set out to achieve the purchase and that’s what we did. Without the local community behind us as they were the real drivers in this it would have been a non runnner from the start.

“The public support was overwhelming.”

The plan for the tourism centre first arose after the compilation of a public realm plan.

“The idea came from what was in the original public realm report from Longford County Council and the Heritage Council,” explained Mr Flood.

“They recognised the visitor attraction that Granard was; the history it has; its archaelogy. The problem was there was no visitor centre. There was nothing that people could come to and get all of that knowledge.

“Yes they could go and visit different things and climb the Motte but there was no way of informing people.”

One possible solution lay in the fact an almost ready-made property was situated within the north Longford town and just yards from the main N55.

The one potential stumbling block was that it was under the auspices of Nama.

Committee members knew they had to act quickly, safe in the knowledge the agency would be looking to recoup the best possible return on any deal for the taxpayer.

A public meeting was called and despite the committee “not having a penny in our pocket”, the bidding process got underway.

Shortly after a further meeting was arranged and independently chaired by Longford EDI Centre’s Pat Kelleher.

And despite one or two reservations among the 120 or so in attendance, the response was unanimous.

That was the easy part.

The more onerous task centred on how to raise the necessary finance.

“The remit of that board was to try and raise the funds to pay for it. We were starting from scratch as we hadn’t a penny.”

Once the fundraising started, the local community was not found wanting.

“That’s our mainstay,” insisted Mr Flood. “Tickets for that are €100 each.

The group are the first to admit even entertaining the idea of door to door ticket selling at a time when many families were feeling the financial pinch was “tough”.

That said, perserverance, together with a string of other innovative fundraising initiatives, paid off.

“You have got to remember you are putting your head on the block,” he continued.

“In the year of the Gathering we ran the Granada Reunion Festival (July 2013) which was a great success and again the wider community gave us fantastic support in every way possible.”

Bingo drives in Streete Parish Hall and Canon Kelly Hall in Granard were two other revenue generating streams as the committee prepare to launch their third draw.

“We are where we need to be and all the funding from our draw is going to clear that bank loan,” insisted the committee secretary.

In the meantime, the group are presently engaging with a range of consultancy firms in terms of how the centre might look.

He made a presentation at a recent Granard Town Council meeting in Colmcille to seek funding , which they obtained.

“We have plenty of ideas, but the day I was down in Colmcille I was looking for that €15,000 in funding to help us do our road map as to where everything should go and until we have that road map done we can’t actually say what you will see when you go in the gate.

“We need a plan and a strategy as to where we are going to go.

“We will know that in the next five or six months.”

Local politicians, accountants Carmel Reilly and solicitor Cliodhna Sheridan also came in for praise for their help over the past two and a half years.

The committee remain fully focused however.

They hope to tap into EU led Rural Development Programme funds for further support and have left the door open for sponsors from home and abroad to provide similar backing.

It is envisaged that the facility will attract a significant number of visitors to the town. It is hoped the project will create jobs, be self-sustaining and will offer educational and recreational benefits.

“We have to be activity based to bring people in,” explained Padraig McGivney.

Fr Simon Cadam remarked: “It’s all about vision for the future, a vision for our town.”

It’s that sense of intensity and dynamism which will make the difference between expectation and reality.

“It’s a hell of an undertaking for a community group.

“We only have one chance and we have to get this right.”