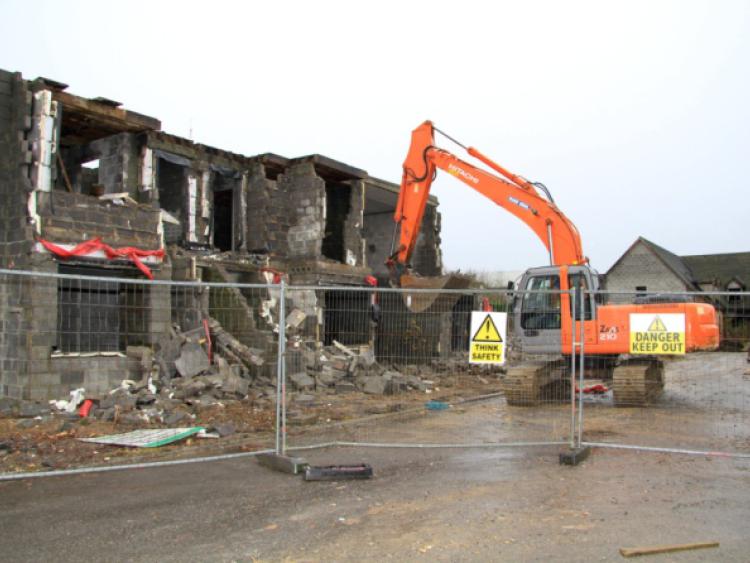 It follows hot on the heels of the recent demolition of eight houses at Dromard housing estate, Sli Corglass in recent weeks..

Details of the Battery Court project were first revealed by this newspaper in September when it emerged council officials were in talks with the development’s owners over a Site Resolution Plan.

As part of the agreed plan, a number of houses are to demolished in the estate.

Longford County Council said in a statement the site’s original owners are footing the bill for the works, meaning there will be no financial burden on taxpayers.

“Thirty-eight unviable units are being demolished and it will take 24 weeks to complete all works,” the statement read.

“The Site Resolution Plan agreed will allow Longford County Council to take in charge this estate in Spring 2015.

The remainder of the houses that are empty are currently for sale.

According to local Fianna Fail Councillor Seamus Butler, the move was the only viable option left open to local authority bosses.

“Let’s not forget there are a lot of good houses in Battery Court,” said Cllr Butler.

“As I understand it, most of the houses that are being bulldozed were apartment style types.”

At the height of the economic collapse, Longford boasted in excess of 100 unfinished estates.

Cllr Butler refuted any criticism of the part played by Fianna Fail in bringing about Longford’s unfinished estates epidemic.

“Fine Gael has held the majority (of power) for the last 15 years until June of this year so if you want a legacy (of Post Celtic Tiger years) you want to look at the local scene rather than the national one,” he said.

In 2005, the Grealy Group announced its intention to launch Battery Court in 2006. Regarded as one of Longford’s most prestigious new developments at the time,

The developers fell foul to the recession and the development subsequently went into receivership in 2009..