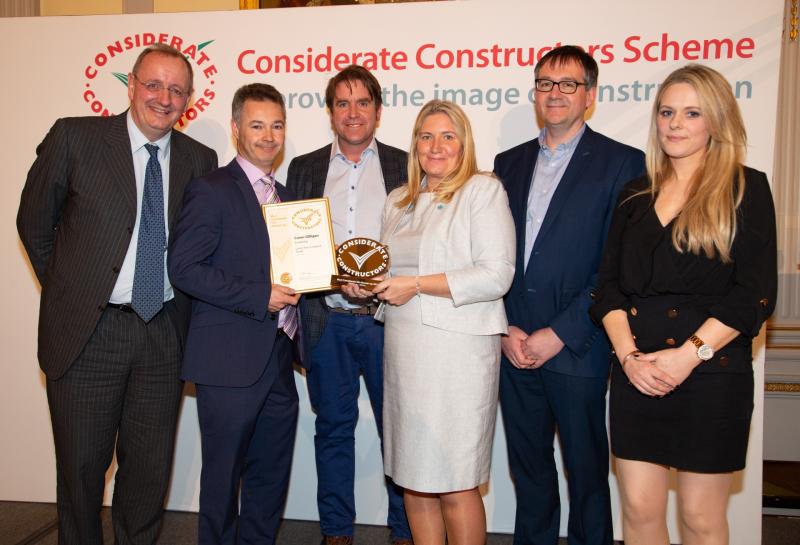 Rrepresentatives from the award-winning team being presented with their award by Jean Duprez MBE, Director, Women into Construction (fourth from left)

Roadbridge has scooped a Gold Award for its Center Parcs Longford Forest project in Ballymahon, County Longford at the Considerate Constructors Scheme’s 2019 National Site Awards. It was also named runner-up for the 2019 Most Considerate Site Award, within the category of sites with project values of £10m to £50m.

The awards were presented at Plaisterers' Hall in London on 5 April.

The Scheme’s National Site Awards are among the most revered accolades within Irish and UK construction industries. They recognise Scheme-registered sites that have demonstrated the very highest levels of consideration in respect of the community, environment and workforce.

The site achieved a number of ‘noteworthy innovations’, including screening and spraying areas with bio detergent to prevent invasive species such as Japanese Knotweed potentially being brought in to the site. Its consideration to the public ranged from offering summer work placements to graduates and people keen to enter the industry to providing equipment to sports clubs. The team even left out food for fallow deer during bad winter weather.

The glamorous awards ceremonies welcomed thousands of guests and took place at iconic venues in Edinburgh, London and Manchester from 25 March - 12 April.

Considerate Constructors Scheme Chief Executive Edward Hardy said: “Congratulations to all the 2019 National Site Award winners. Each award winning site should be extremely proud of receiving this prestigious industry accolade, which recognises their invaluable contribution to improving the image of construction.

“Year-on-year, the Scheme places a higher level of expectation for the 7000 plus construction sites typically registered with the Scheme at any time.

“We are always amazed by the increasing levels of performance on site across the country, and we look forward to performance continuing to increase through next year and beyond.”