Ballymahon students explore the world of engineering, gaming and space flight at AIT 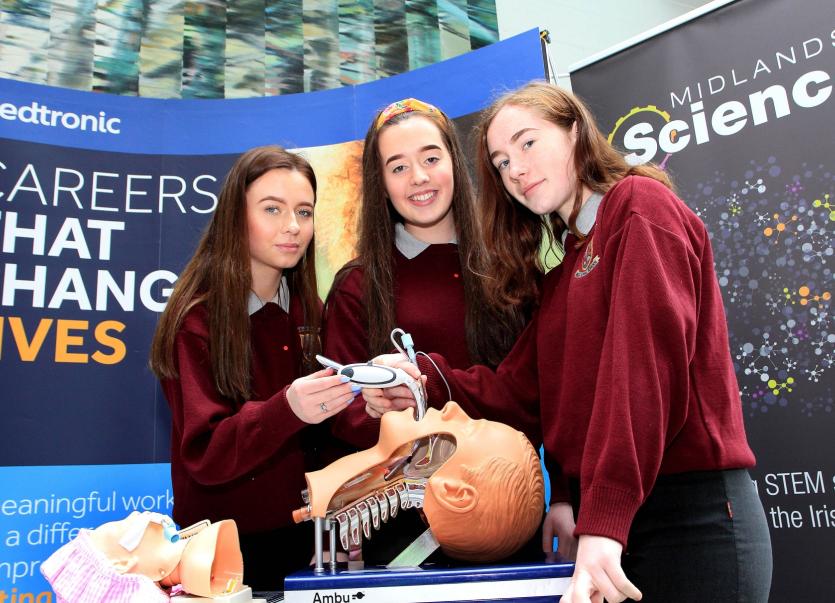 Students from Ballymahon and across the Midlands got a unique insight into the world of engineering by taking part in a series of workshops at AIT organised by Midlands Science in association with Medtronic.

As part of Engineers Week, the workshops explored everything from space flight to polymer engineering at this unique event at AIT.

Students also had a unique chance to act as life-savers, performing an intubation procedure on a dummy patient. Many of the students were familiar with the procedure from medical TV shows, where the procedure is often shown in life or death situations in an emergency room. With some instruction from Medtronic staff, students got the chance to try out this for themselves and learn about Medtronic.

Tracheal intubation, usually simply referred to as intubation is frequently performed in critically injured, ill, or anesthetized patients to facilitate ventilation of the lungs. Medtronic produces a range of intubation products in a full range of sizes from adult to paediatric. Through a series of career talks, students also learnt about various careers in Medtronic and about how engineering is really about thinking creatively and enjoying solving problems.

Science and Technology communicator Declan Holmes delivered a series of shows exploring space exploration and the role that engineering plays in such exploration.

The Engineering Department at AIT delivered a series of engineering workshops exploring civil, software and polymer engineering, reflecting the wide variety of engineering courses available at the Institute. Students also got the chance to engage with Dr Mindflip’s Ultimate Learning Experience, a science outreach project with a difference! Known to many from its appearances at various locations around the country, it provides students with an immersive experience where they choose their own adventure in a game and follow the story of a mad scientist, Dr MindFlip, and his robot assistant Anustasia. This award-winning outreach project was developed by a team of scientists, film-makers, script-writers and artists with a view to making physics and engineering more accessible and engaging for young audiences. It is housed in a vintage caravan, resembling a type of metallic machine on the outside, something you could imagine out of a Tim Burton movie, which turns out to be an interactive video game about physics and engineering on the inside.

Engineers Week is a national week-long celebration of the world of engineering in Ireland. Everything from bubbles in chocolate bars to life-saving cancer treatments involves engineering. However, not enough young people, especially young girls think it’s a world for them, so industry often struggles to recruit engineering talent. It also means that young people are missing out on exciting opportunities to make a difference in their own lives and the world around them. Engineers Week is coordinated nationally by Engineers Ireland’s STEPS programme, which is funded under Science Foundation Ireland’s Discover programme Call. Dr Sean Lyons of AIT commented that events such as this were “instrumental in encouraging the future matriculation of secondary school students into STEM subjects and, ultimately, careers.”