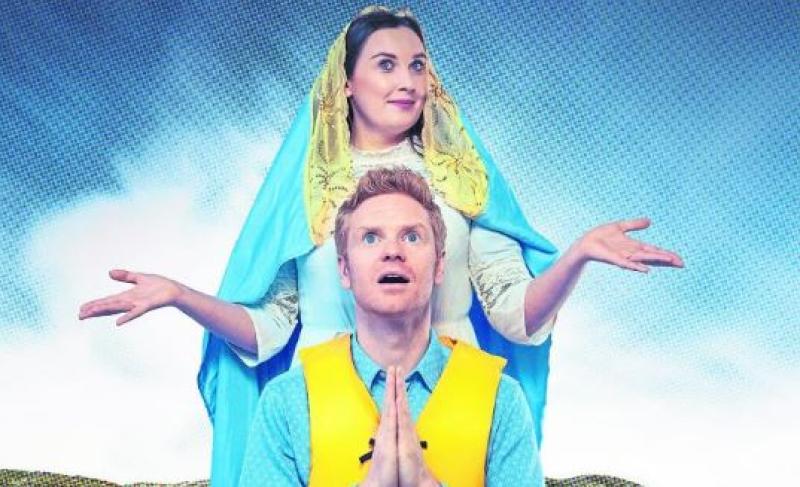 2020 marks a very special year for Backstage Theatre as they celebrate 25 years of entertaining the people of Longford and they are celebrating in style with a Spring season jam packed with the very best in theatre, comedy, dance and entertainment for everyone!

Livin’ Dred kick off the theatre season with their highly acclaimed production of Trad starring Seamus O’Rourke and Clare Barrett who brought the house down recently, as the mother, in Much Ado About Nothing. Directed by renowned Druid ensemble actor Aaron Monaghan, Trad is certain to bit a popular hit.

Edinburgh smash hit A Holy Show is certain to have people rolling in the aisles as it takes an hilarious trip down memory lane revisiting “the bizarre true story of a hijacking involving an Irish plane, Albert Reynolds and the Third Secret of Fatima.”

Continuing the reminiscing Maura Laverty, former trailblazing broadcaster, writer, cookery expert comes back from the dead to appear in front of a live and online audience on a surreal TV show called This Was Your life.

Jon Kenny finishes off the season with his darkly comic play Crowman.

The formidable trio of Abbey Theatre, Irish National Opera and Theatre Lovett join forces to bring what’s sure to be the hit of the season with Humperdink’s Hansel & Gretel.

They will also return with a sensory friendly version of the panto which proved very popular last year, selling out in advance.

The kids fun continues with Kyle Riley’s Kid’s Rock show for under 8’s, Bosco and the ever popular Easter Theatre Camp.

We are getting set once again to reveal the hidden talents of some well-known Longfordians in Stars In My Eye, the all-singing, all-dancing extravaganza that you will not want to miss! Dedicated to the memory of Dearbhla Considine, who despite her illness, gave so much as a mentor on our first ever Stars in 2015.

We have lots of wonderful memories of working with Dearbhla on that first production memories that also include working with the wonderful Peter Kelly who thrilled our audience as Elvis.

Join us to see new stars and old stars come together to pay tribute by wowing audiences in a great night’s entertainment.

There will be much more local talent on display with BTG’s comedy The Memory Of Water, St Mel’s Musical Society’s production of Hairspray, A Night on Broadway with members raising money for the production alongside Evolution Stage School. Students display their talents with performances from School of Rock & Peelo School of Dance.

Music fans can look forward to Rock & Roll Years and Dance Hall Days, Mick Flannery, Luan Parel & Mick Flavin and tickets for The Furey’s are moving fast. Speaking of moving fast, Tommy Tiernan sold out within hours of going on sale so be sure you don’t miss out on any of the shows that tickle your fancy and book tickets or vouchers now on 043 33 47888, from Farrell Coy in Longford town or online on backstage.ie