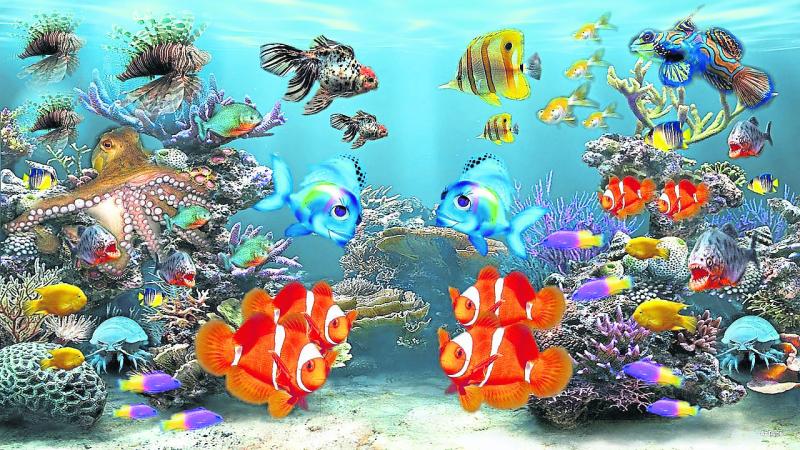 A long time ago, deeper in the past than the pacific ocean, lived a little sea creature named Georgie.

However there was something distinct about Georgie - something that set him apart from the many sea creatures living down in the great Atlantic.

Unfortunately it was also something that everyone looked down upon. He didn’t even have any friends as a result of this difference.

What was so bad about Georgie for him to be treated this way, you ask? Well the answer is not what you’d expect.

Georgie was in fact a transparent fish. His lack of colour made him a ghost to society, blending into every drop of water he swam through and every piece of coral he passed by.

Now, you may be wondering, why would that even be a reason for him to be disowned by everyone in his community? By his own friends and peers? It doesn’t seem right, does it?

I agree, but you must understand this cluster of sea life was so adjusted to seeing creatures bursting with colours and intricate patterns tattooed onto their gills, that seeing a barrel-eye (the name used for the small amount of fish just like Georgie) was all very strange for them.

These questions were too difficult for the aquatic animals to comprehend. It just seemed easier to ignore the idea altogether and leave others behind, instead of trying to understand them and accept everyone for their flaws.

The whole Atlantic Ocean followed this ideology, and every barrel-eye accepted their place in society, no matter how lonely it meant their life would be.

But Georgie wanted to change this.

One day, he decided he was exhausted of the isolation his community served him. It was so unjust that all these creatures were accepted for their true colours but he wasn’t, all because he possessed none for himself.

So, instead of causing a riot and creating an even bigger split in the ocean, Georgie decided to band up with anyone who had been left behind for their differences and make a stand together to educate the other sea life rather than arguing with their views.

After a while of finding fish and sea creatures alike who had been hiding away, Georgie and his newfound friends set out on their journey to the other side of the ocean where there was a lot more life and of course, a lot more colour.

After what seemed like forever dodging killer whales and the enormous razor sharp teeth of sharks, they finally reached their destination.

Upon arrival, many of the fish around them began to swim in the other direction if they had noticed that the barrel eyes were in their path.

So after a few deep breaths of the cold salty water, he approached the crowd in front of him and began his speech once their attention was surprisingly caught, like a fisherman catching a muskellunge on the stormiest day of the year.

And I’ll tell you, his speech was more than just inspiring; it was powerful.

It was amazing that someone of his kind was speaking so independently, confident in front of such intimidating audience and that they were listening so intently to every word he said.

He explained to them that, just because he might look different compared to the norm, doesn’t mean that everyone should ignore him or mistreat him.

He said that he was a happy and loving creature like the majority of them, and that, if you strip away all appearances, everybody looks the same on the inside.

He pleaded for acceptance and for them to try and understand him and all the others.

After some time, the crowd swam towards him. They felt sorry and explained that they did not mean to cause such a divide in the community.

And just like that, there was peace once again. Georgie and his friends were able to live their lives free without judgement and there was a sense of acceptance in the sea ever since that day.

Everyone is different in their own way and we all have our own weird quirks.

Nobody should be left behind in society for being who they are. It only takes one person to make a change.

Acceptance and diversity is what community means to Georgie. It’s what it means to me.

And it should be what it means to you too.