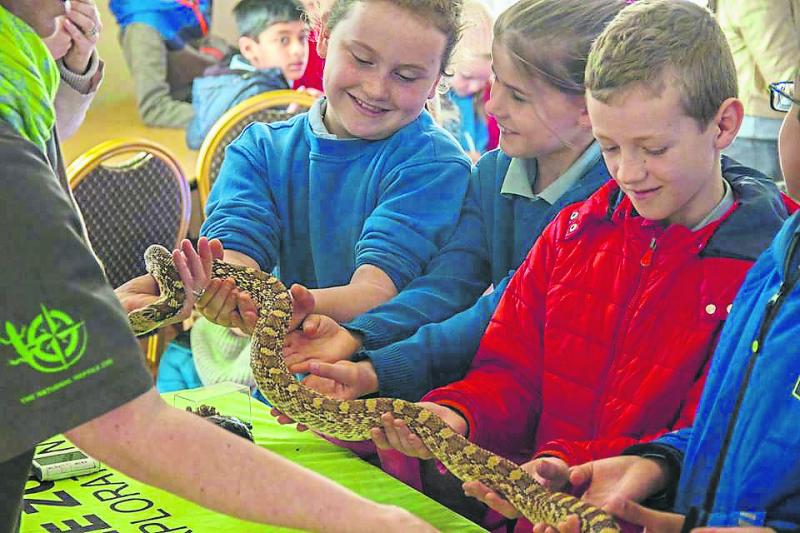 They came to engage with members of the Edgeworth family who were steeped in the many fields of science.

Last weekend the town again hosted a number of scientists including Con Hussey, Professor of Lightwave Technology at the University of Limerick.
Con engaged with the young pupils of St Mary’s and St John’s national schools when he introduced them to everyday science.

Later in the evening he gave an talk based on the Higgs Boson and linked the world of science to the difficulties the world is facing today including hunger, religious conflict, debt and war.

The audience enjoyed his talk which was followed by a lively question and answer session.

One of the highlights of the day was the Exploration Dome and the Reptile Zoo, where over three hundred children and adults experienced the wonders of the Universe in the unique setting of the 306° Dome.

The Reptile Zoo offered the children the chance to learn about the important role animals play in the ecology of our world.

They also had the opportunity to handle the animals including snakes, lizards and turtles.

Watching Superhero movies will never be the same again for the children and adults who took part in the 'Science Behind Superheroes' workshops run by scientist Barry Fitzgerald.

Barry introduced his audience to the science behind many familiar Superheroes such as Iron Man, Superman, Wonder Woman and Spiderman.

He linked the technology displayed in these movies to the real world of science.

Barry spoke of the many scientific concepts ranging from genetics to mechanics, and from thermodynamics to chemistry.

He questioned whether the research and technology used in the making of Superhero movies would, one day be a viable spin-off in developing useful applications for mankind.

Barry was an expert in his field and engaged with the young minds from County Longford who asked some very interesting questions.

The festival concluded on Saturday evening with a coding session, in the appropriate setting of the Old Schoolhouse on the Ballymahon Road.

The schools one of the oldest school buildings in Ireland, having been built in 1840 shortly after the Education Act of 1831 which established the National School education system we know to this day.

The coding workshop was facilitated by Longford Coder Dojo and was attended by twenty-two budding coders who may go on to achieve greatness in the field of computing.

The Midlands Science Festival is five years running this year and it had over 130 events across the region, including a range of events in County Longford.

The festival is managed and developed by Midlands Science, a not for profit company focussed on promoting STEM issues in the region and they were delighted to work with the Edgeworth Society this year to celebrate science in their community.

Edgeworthstown celebrates its links with the literary and scientific greats