Ballymahon musician on crest of wave as home gig sells out 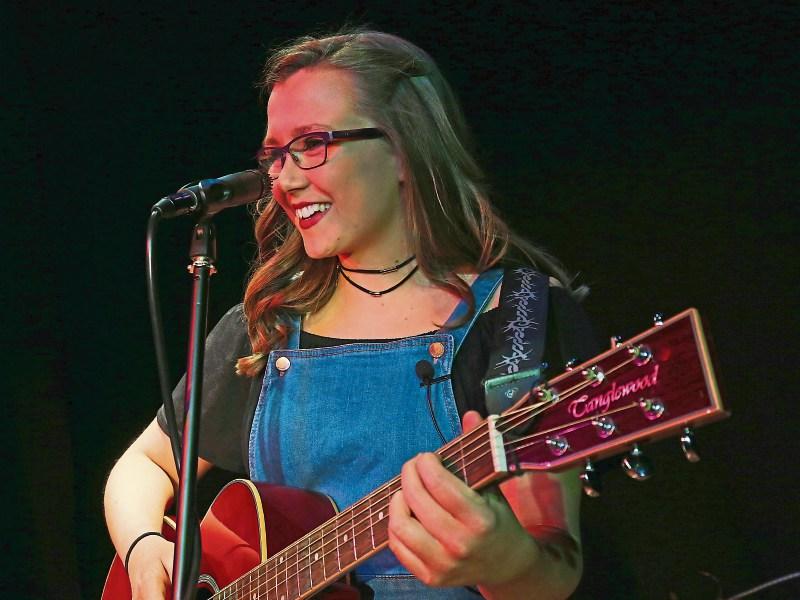 Ballymahon musician Katie Gallagher is on the road to success and on Friday night, April 28 last, that road brought her home, where she performed in the Bog Lane Theatre.

Following the success of her debut single, ‘Two Runaways’, which was launched a week earlier, Katie’s gig in the Bog Lane Theatre sold out, with crowds of fans, including family and friends, coming to support her on the night.

The 20-year-old singersongwriter shot to number one with the debut single in the iTunes country charts, and numbers two and three with live versions of two other songs - 'Aphra's Song' and 'Never Go Home' -  within the first 24 hours of release.

The debut single even beat Nathan Carter to the number one spot in the country charts, and was soon inching its way to number 18 in the overall Irish downloads charts.

“My debut single, ‘Two Runaways’, is all about escaping from whatever troubles a person has in their lives, whether it be relationship breakdown, college or work,” Katie told the Longford Leader following the release of her single.

“From the moment I wrote this song, I used it as a therapy by playing it when I’m going through tough or challenging times.”

Katie was signed by Downda Road Productions in June 2016 and has been working hard towards a summer release date for her debut EP.

That release date will come at the end of the summer, but in the meantime, Katie has a jam-packed schedule of events and will appear at venues and festivals all over Ireland during the summer  months.

So it's no wonder her gig in Ballymahon sold out, with fans wanting a piece of her before she heads off on the road to fame.

“To say I woke up this morning with a huge smile on my face is an understatement,” said Katie on her official Facebook page  (@KatieGallagherMusic) the morning after her sold-out gig.

“Thank you so much to everyone who came out last night - never thought I'd get to say sold out gig!

“And thank you for the support the whole way through this journey and I hope you keep supporting me.

“Thanks to Downda Road Productions once again for organising all this and making it all happen! A massive thank you to Sina Theil for being our guest and for playing her beautiful music!”

CDs will be going on sale in participating shops, and Katie will keep her fans updated on her Facebook page.