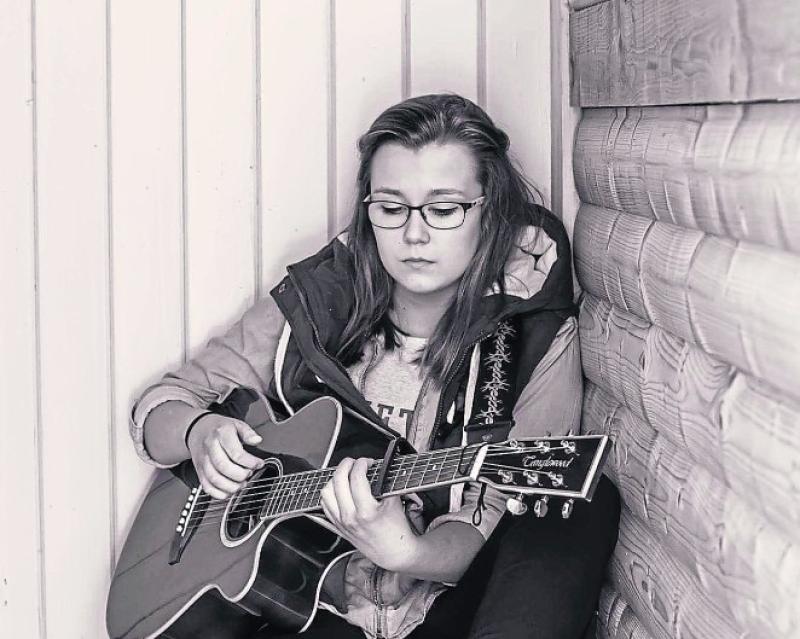 The really important aspects in a song are the lyrics and the story behind it, according to Ballymahon singer/songwriter Katie Gallagher who is currently enjoying the success of her debut single.

20-year-old Katie released ‘Two Runaways’ on Friday April 21 and by that night had already rocketed to a number one spot on iTunes, overtaking even Nathan Carter in the country charts. That’s no mean feat.

And if that wasn't enough success for her, by Saturday morning, Katie was at numbers one, two and three with 'Two Runaways', 'Aphra's Song (live)' and 'Never Go Home (live)' respectively, as well as hitting number 18 on the Irish download charts.

“My debut single, ‘Two Runaways’, is all about escaping from whatever troubles a person has in their life, whether it be relationship breakdown, college or work,” Katie told the Longford Leader last week.

“From the moment I wrote this song, I used it as a therapy by playing it when I’m going through tough or challenging times.”

Katie has been playing music from the age of five and started writing her own songs in sixth class. She plays the piano and guitar and started the cello this year, and all of these instruments feature in her writing process.

“I listen to all sorts of music from country to rap, but what draws me to a song is the story behind it. Lyrics are so important to me and I try to bring a strong story to my own song-writing,” she said.

Katie is currently studying music in DCU and has an eclectic range of influences, including The Rat Pack, Gavin James, Elvis Presley’s approach to Hollywood-era love, the modern storytelling of Taylor Swift and Ed Sheeran, and the folky, rhythm-driven music of Keywest and Mumford and Sons.

Driven by a desire to create music dealing with relatable themes, Katie’s style ranges from soft and lyrical storytelling to rustic, upbeat anthems.

“My music can be described as alternative country mixed with elements of all genres.

“It is extremely difficult for me to pigeonhole myself into one genre and I try to mix all styles into one, but the forthcoming EP will have strong folk/Americana vibes,” said Katie.

So her music has something for everyone.

Aside from writing music and studying for college, Katie has a job in Nally’s Spar, Ballymahon and greatly appreciates the support she has received for them over the past year or so.

She was signed by Downda Road Productions in June 2016 and has been working hard towards a summer release date for her debut EP.

And with the success she’s enjoying so far, it’s looking like Katie could have a bright and prosperous music career ahead of her.

“In terms of the future, the sky's the limit. I’m under no illusions when it comes to the music business and I realise that all this could be over tomorrow,” she said.

“But while I am in this world, I’m going to work as hard as I can to make the most of it.”

The release of her debut EP at the end of the summer will be celebrated with a tour. But until then, Katie has a jam-packed summer of festivals, gigs and writing new songs.

Over the past few months, Katie has been gigging regularly on the Dublin singer/songwriter scene and in surrounding counties and, on Friday April 28, she’ll be coming home to Ballymahon for a very special performance in the Bog Lane Theatre.

Support on the night will be provided by Sina Theil and admission is €10. The show starts at 8pm and tickets are available from DowndaRoadProductions.com.

To keep up to date with Katie and her music, see @KatieGallagherMusic on Facebook.