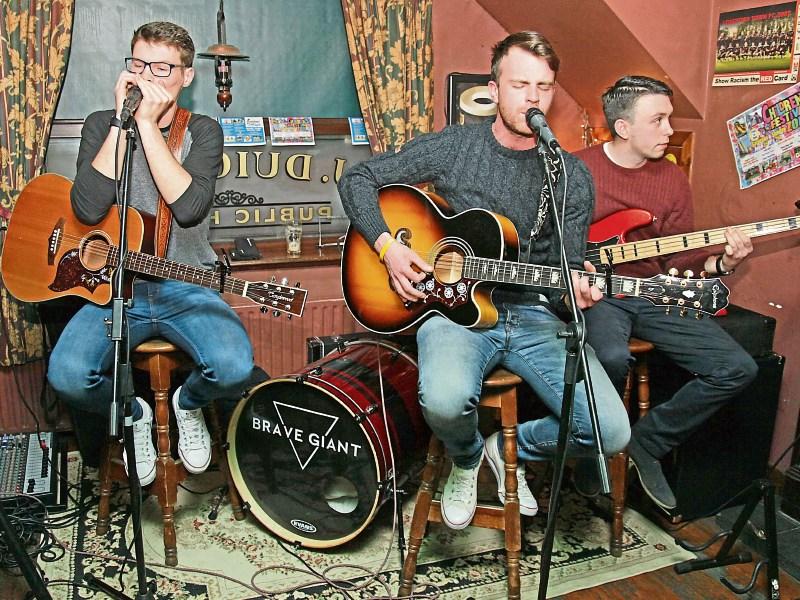 Every band needs a big break and for Longford band Brave Giant, that break came on Friday night, when they appeared on the Late Late Show for their TV debut.

Brave Giant have been climbing the ladder to success for some time now, but they certainly put Longford on the music map when they performed their new single ‘The Time I Met the Devil’ to a live audience, and countless at-home viewers.

The band, made up of Emmett Collum, Mark Prunty, Podge Gill, and Ross McNerney declared on their Facebook page last week that they were “ecstatic to announce that we’ll be making our first live national TV experience on the Late Late Show this Friday”.

From there, things only went up for the five Longford lads.

“The whole experience was extremely surreal. We went on and we came off and it was all a bit of a blur,” said Emmett Collum of the bands TV debut.

“Every band looks at bands up there and wishes it was them, so it was unbelieveable to get that exposure, and it was great timing with the single and the Whelan’s gig coming up.”

Brave Giant are enjoying the feeling of having tickets for their gig in popular Dublin venue, Whelan’s, completely sold out for Saturday, April  22.

Fortunately for fans, an extra date was added to accommodate the demand. There are still tickets available for Friday, April 21, though with the speed at which the band is shooting to fame, it’s advisable that you get your hands on tickets as soon as possible to avoid disappointment.

The band has gone through many changes since it formed in December 2011, when Guitarists and Vocalists, Mark Prunty and Podge Gill formed Dutch Courage.

As the years went on, they added to their number, with Ross McNerney bringing his banjo skills into the mix in 2013.

It was around this time that the band started to develop its own unique sound and, with this new direction, they decided to change the name of the band to Paroma.

But they didn't stop there, with Drummer Emmett Collum joining them  in August 2014 and, in 2015, they added David Kilbride to the mix as bassist. But David left in 2016 and the band returned to being a four-piece.

In 2015, they made a final change to the name, choosing Brave Giant as the title that would bring them to fame.

Brave Giant released their single 'The Time I Met the Devil' last week and it is now available for download on iTunes.

And, yesterday evening, the band posted the music video for their new single on their Facebook page.

For more on this story, and to watch the video of Brave Giant's incredible performance on the Late Late Show last Friday night, see www.longfordleader.ie.