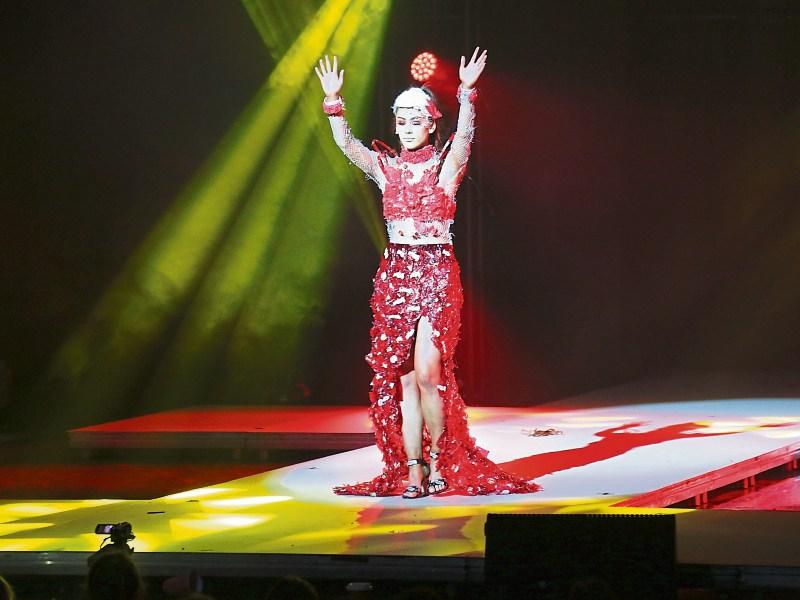 Cnoc Mhuire in Granard is celebrating this week after one of eight entries to the annual Junk Kouture competition managed to nab a coveted place in the final.

Cnoc Mhuire had eight entries from 22 Transition Year students this year, each one as striking and unusual as the last.

But faced with the extremely high standards at the Western Regional final on Monday 13 March last, success went to three students and their creation, 'Babybelle'.

Babybel cheese packaging was the putty in Rachel Farrell, Róisín Duggan and Victoria Gilliard’s hands when they made a stunning costume from the net, paper and rubber-like covering of the popular snack-sized cheese.

The girls modeled the finished product on Róisín Duggan - who did the initial design of the dress - and who strutted her way to one of only 20 places at the glamorous grand final, which will take place in April.

Art teacher at Cnoc Mhuire, Charmaine Hetherton said that the girls were “delighted and releived” to get through.

“The students really enjoyed the show and the whole day. They all did their absolute best and I could not have asked any more of them. I am very proud of all the groups,” she said.

At the final, the girls will be judged by such famous faces as Louis Walsh and Una Healy, and will be in with the chance of winning some great prizes.

The winning team will get €2,500 cash for their school, as well as the Junk Kouture trophy. They will also win €500 cash and an iPad mini each.

As Regional winners, the team and their teacher, Miss Hetherton, will be travelling to the 2017 Canne Film Festival in May.

On top of these prizes, there are scholarships up for grabs in the country's top art and design colleges.w