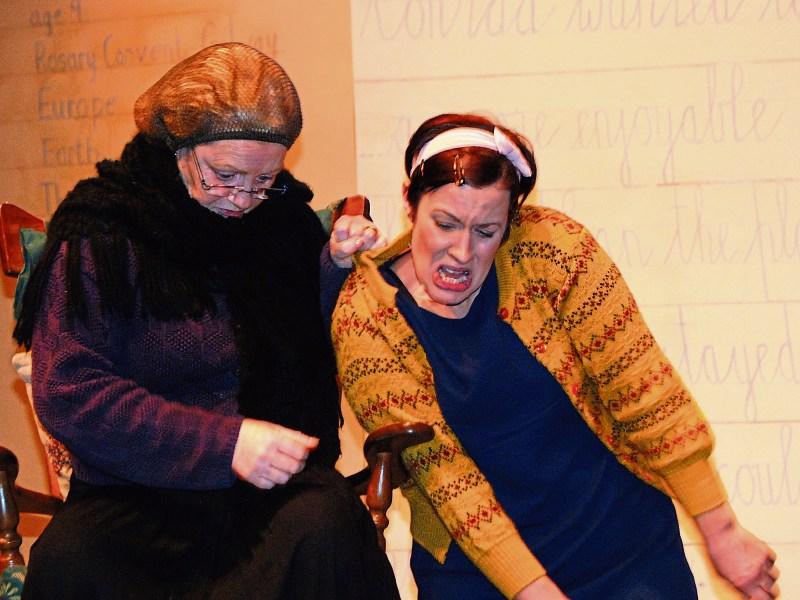 Directed by Ollie Kenny, the play was a progressive piece which followed the life of a young aspiring writer Brenda Barnes.

As an audience, we followed the protagonist through the trials and tribulations she faced in her quest to become a young woman in the eyes of the world.

Although the continual leaping forward in time - by several years per scene - might have presented problems for many an amateur group, BTG dealt with it excellently.

The transitions were done seamlessly through the use of a small projection on the back stage wall at the beginning of each scene displaying the year in question, along with good use of staging and set dressing.

Great credit is due to the stage management team and set design for the speed of scene changes throughout.  Lighting of the show was excellent and the musical score was one of the actual talking points of this production.

The piece was fast-paced and dealt with a range of issues that were kept hidden below the surface of Irish society at this time - dysfunctional families, the taboo of sex education and the fear of the church to name but a few.

Each of these themes was well executed with a careful blend of authenticity and humour which was informative but never disembodied the play's unique sense of charm.

Within two hours the audience simply fell in love with Brenda Barnes and the host of colourful characters she encountered along the way.

The actors made commendable use of levels, gait and accentuation to disguise themselves in a variety of different characters, each one bringing with it a new sense of purpose and energy.

Christine O’Brien in the lead role gave a stunning portrayal of Brenda Barnes, her versatility making the various ages in which we see Brenda thoroughly believable.

Philip Cox also gave us a an excellent portrayal of her father Desmond, with Eileen Murphy, particularly as ‘Granny’ and Maureen Dunne as her Aunt Peace giving very strong performances in those roles.

Declan Neville, Niamh Quinn Hanley, Davy Flaherty and Liz Leavy were all excellent in their various roles, displaying the depth of acting talent available in Backstage Theatre Group at the moment.

For a production which began at a lively pace, it never once lost its momentum due to the commitment of each of the actors in turn, which to their credit is no easy feat.

All humour, beauty and creativity aside, the play also never lost sight of its central theme - ‘same old moon’.

A visual moon reflected onto the back of the stage and the most memorable speech of the script inscribed on the backboards of the set cleverly served as a reminder of the play's core value and the outlook on life it represented.

For this reason, all theatre-goers left the auditorium with empathy for Brenda, a belly full of laughter and a clear idea of the sentiment which resonated throughout the play.

This is a huge credit to the group, who I hope to see take on similar productions in the near future.