Inspired by the people of Longford 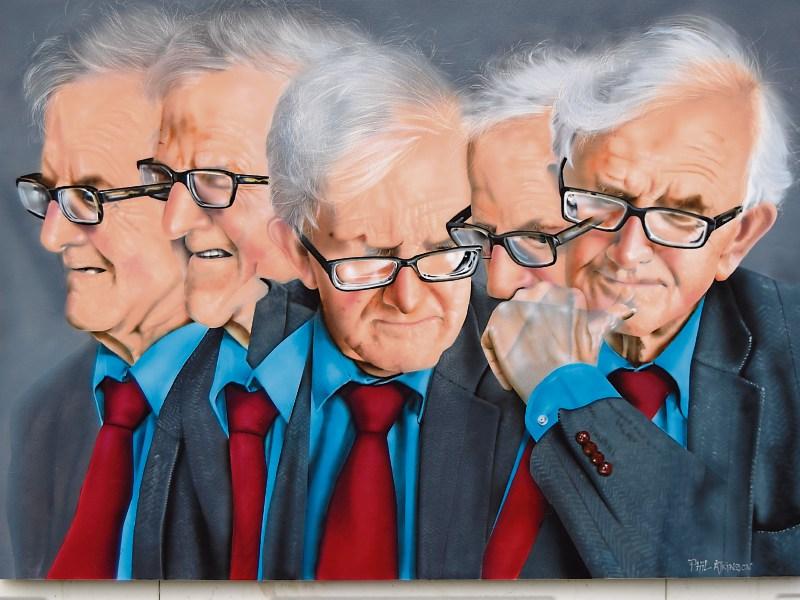 There will be many familiar faces around the Backstage Theatre tonight (Wednesday, February 8).

They won’t be attending a show, however.

Rather, they will be adorning the walls, as locally-based artist Phil Atkinson presents his first major solo exhibition, inspired by the people of Longford.

A self-taught artist, Phil completed a PLC course in Fine Art at Templemichael College, Longford, and is a key committee member in the annual Cruthú Arts Festival.

He works almost exclusively through the medium of air-brushed acrylics, and over the past couple of months, he has been painting the portraits of well known individuals.

“It’s based on Longford people, ordinary people that put in a shift, that do a lot for Longford that often don’t get recognition or even look for recognition,” Phil explained, before revealing that his girlfriend, Anna Delaney, was also playing a role in the exhibition, as a writer.

The plan is to feature ten local faces in the exhibition. Each subject will be interviewed, and as they speak, Phil will take photographs.

The paintings will be multi-layered, according to Phil, and will capture the essence of the interview, while Anna will use pieces of the interviews and weave them with her own words to accompany the paintings. It’s also hoped that the two will produce a small book containing their works.

“I’ve got the first one done and I’m quite happy with it,” Phil continued, revealing that the completed painting features ‘Fireside Tales’ author Jude Flynn.

“It’s an appreciation for the people we’ve chosen. Some you would know well. For example, one woman works in a coffee shop and she’s the heart and soul of the coffee shop.”

Phil has already enhanced Longford town with his art over the past few years while Anna is embarking upon her first publicly launched publication, so this exhibition launching at 8pm on Wednesday, February8 is not to be missed.