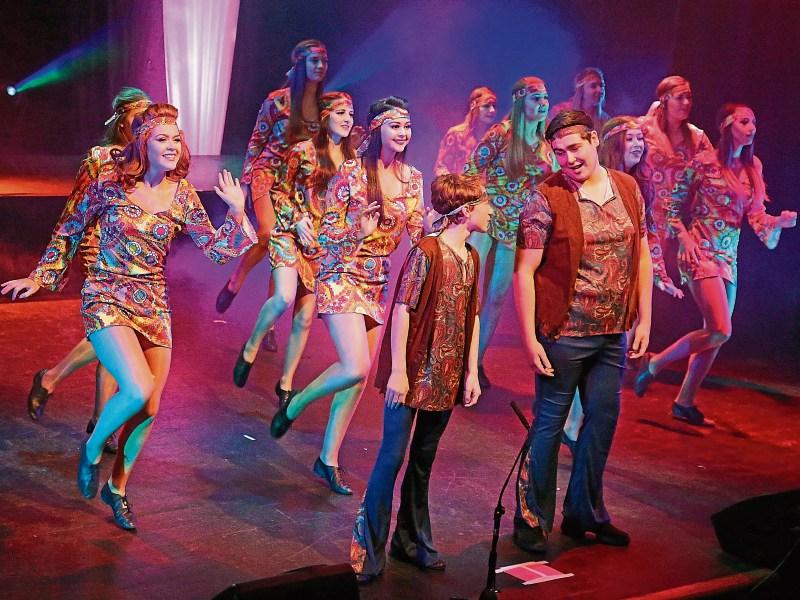 'Get Up And Dance' was the title of Evolution Stage School's sixth Longford production, and by the time the curtain closed, that's what most people wanted to do.

From start to finish, the talented youngsters burst onto the stage with an energy that was nothing short of infectious.

A colourful sixties medley opened the show with some well-known favourites, before we were treated to songs from 'The Wizard of Oz'.

A trio of singers then took to the stage for the Disney classic 'Colours of the Wind', before the Junior Stars, the youngest of whom are just three years old, gave a wonderful performance.

David Kiernan and Anna Lily Fox changed things up a bit by keeping it country, followed up by a medley of London songs.

Just before the interval, the group performed a segment which will live long in the memories of the audience members.

Following audio clips of breaking news stories from this year, two groups of students  took it in turns to perform tributes to the late, great Prince and David Bowie.

Soloists Iarlaith O'Rourke, Jaimie Fallon, Aoife Mulhern and Sinead Mulhern, as well as teacher Paul Hennessy beautifully brought the songs to life, before ending with an incredible mash-up of Prince's 'Purple Rain' and Bowie's 'Starman', with elements of 'Space Oddity'.

A definite highlight in the programme came directly after the interval, when the curtain came up on the wonderfully-spooky Jaimie Fallon, Grace Kenny and their 'Rocky Horror' group performing the 'Time Warp'.

The popular 'pop' medley brought the likes of Justin Bieber and Ariana Grande to the Backstage, immediately followed by Sinead Mullally, who performed a beautiful, moving rendition of 'Wind Beneath my Wings'.

Songs from the musical 'A Chorus Line' and the Christina Aguilera hit 'Reflection' kept the audience entertained, before teacher Tracey Carty and the Evolution tappers paid tribute to another superstar; Michael Jackson.

'Man in the Mirror' and 'They Don't Care About Us' were particularly impressive; the former for its clever projection work and well-timed dancing and the latter for its powerful simplicity and synchronisation.

12-year-old Caoimhe Mooney took centre stage then, to perform the song which saw her go 'viral' earlier this year; 'Grace'.

Afterwards, Paul returned to the stage  with Conor McLoughlin and David Kiernan to perform the hits of Neil Diamond.

Sadly, the end came all too soon, with a finale which included a song written by  Paul , called 'Cause We Believed'.

“The lights come up we take the stage,

“In our costumes that sparkle, shine and glow,

“We do our best at every age and we really hope

“You all enjoyed our show,” they sang out.

The audience more than enjoyed it, if the standing ovation at the song's reprise was anything to go by.

All six shows which were performed by the talented stage school between November 2 and 6 were completely sold out. If you missed out, don't worry, as some members will return to the stage in February 2017 for a fundraiser with St Mel's Musical Society called 'A Night on Broadway'.