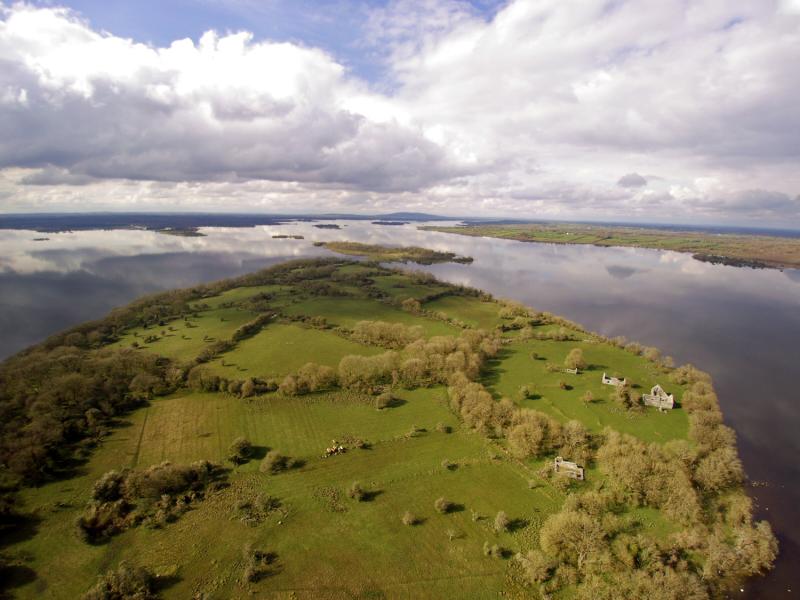 An aerial photo of the Quaker Island.

If you missed the Lesser Spotted Journeys programme on Tuesday evening on UTV which featured South Longford places of interest, well don't despair as you'll have another opportunity to see the programme this Sunday, October 30 at 5pm on UTV Ireland.

Programme presenter Joe Mahon travels to Ballymahon, where he discovers some of the amazing things that can be found in the bog, including a 2,000-year-old trackway, a narrow-gauge railway line and bogwood that is transformed into beautiful sculptures.

Here is some more detail on the programme;

The Royal Canal was built through here in the early 19th century, and Joe travels along the canal path in grand style, in Pat Kilduff’s beautifully restored tub trap, drawn by his horse Kate.

Pat chats to Joe about how horse-drawn vehicles were the main form of transport in the early 19th century and how even the canal barges needed horses to pull them.

Needless to say, the arrival of the railway signalled the beginning of the demise of the canal, and it eventually closed down in 1961. It fell into a sorry state until it was restored in the later decades of the 20th century.

In Ballymahon, the canal clean-up was led by volunteers like Michael Greally of the Royal Canal Amenity Group, and he recalls the efforts that went into restoring the canal and its banks to the pristine recreational area it is today, as well as chatting about some of the local memories that have been collected of the trading boats that came up the canal in its heyday.

Outside of Ballymahon itself, one of the dominant features of the landscape is the vast acreage of bogland, which has been harvested by Bord na Mona since the 1940s in order to make their peat briquettes.

Operations manager Mick Cahill shows Joe how turf-cutting is done on an industrial scale, and chats about the innovations that Bord na Mona has made over the decades, including their narrow-gauge railway system to transport the turf, which has aroused the interest of small railway companies from all over Europe.

Laying tracks across the bog is by no means a modern practice, however, as Joe discovers when he visits a very unusual structure in the middle of the bog – a state-of-the-art domed interpretative centre that has been built around a section of the 2,000 year-old wooden trackway that was discovered at Corlea in the 1980s.

Longford County Council planning officer, Donal Mac An Bheatha, shows Joe the temperature-controlled room where the trackway is preserved, and chats about the huge engineering feat that would have been involved to build it in the Iron Age.

Joe then takes a stroll along the modern trackway with Donal, and local artist Frances Kelleher, as Donal discusses the plans afoot to turn the area into a vast parkland, and Frances chats to Joe about the inspiration both she and her artist daughter, Orla Kelleher, take from the landscape of the bog.

Joe pays a visit to the workshops and gallery of another parent and child artist duo, who not only take their inspiration, but also their raw materials from the bog.

Celebrated bog oak sculptor, and his son Kevin chat to Joe about the process of creating works of art out of ancient, peat-preserved wood.

Another family who are dedicated to preserving beautiful old things, are the Egan family, whose farm, with its original 18th century farmyard, is a kind of agricultural museum. From traditional farming methods like the horse-drawn plough to a beautifully-maintained antique agricultural machinery collection, you can find it here.

Joe chats to historian and broadcaster, Paddy Egan, who demonstrates the use of some of the assortment of household and farm objects of days gone by that he keeps in his perfectly restored ‘Granny’s Kitchen’.