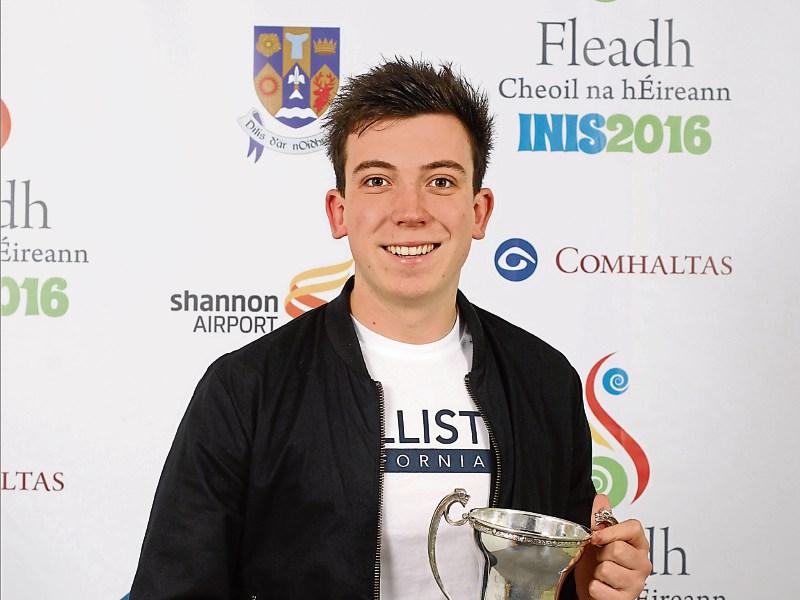 Less than three weeks after starting lessons on the drums, Edgeworthstown native Eoghan Gilchrist was performing with a céilí band at the Connaught Fleadh, so it's little surprise that he has fared so well in the competition down through the years.

The 20-year-old son of Maura and Martin started his lessons at the age of 13, when his mother spotted an advertisement for tuition at the Green.

“I kind of just took to them llike a fish to water,” Eoghan said, admitting that he was “absolutely trembling” competing in his first Fleadh.

Down through the years, Eoghan competed both solo (in the céilí band drums category) and with céilí bands in the Fleadh Cheoil. It was in his first year competing in the under 18 category that he won his first All-Ireland gold.

“I didn't compete solo after that,” he revealed.

He still competed with the céilí bands, however, and it is with  the Dublin-based Liffey Banks Céilí band - alongside fellow Longfordians Rachael Masterson and Elaine Reilly - that Eoghan keeps the beat.

Though he was eligible to take part in the over 18 category last year, the Cnoc Mhuire past pupil was unable to compete, but made a triumphant return this year, scooping the top prize in Ennis, Co Clare at the Fleadh Cheoil na hÉireann last month.

“Thanks to the two people who played with me, Elaine Reilly, who played banjo and Joe Keane from Portlaoise who played button accordion,” Eoghan continued.

Eoghan also paid tribute to his teacher Martin Murphy, who is a former champion himself.

Looking towards the future, Eoghan, who started his second year of Aeronautical Engineering in the University of Limerick last week, said that he won't compete in next year's solo competition but would like to try his hand at another instrument.

“I started playing the button accordion, but it came to the Leaving Cert and I didn't have the time,” he said, expressing his hope to return to the instrument and perhaps compete solo again at the Fleadh.