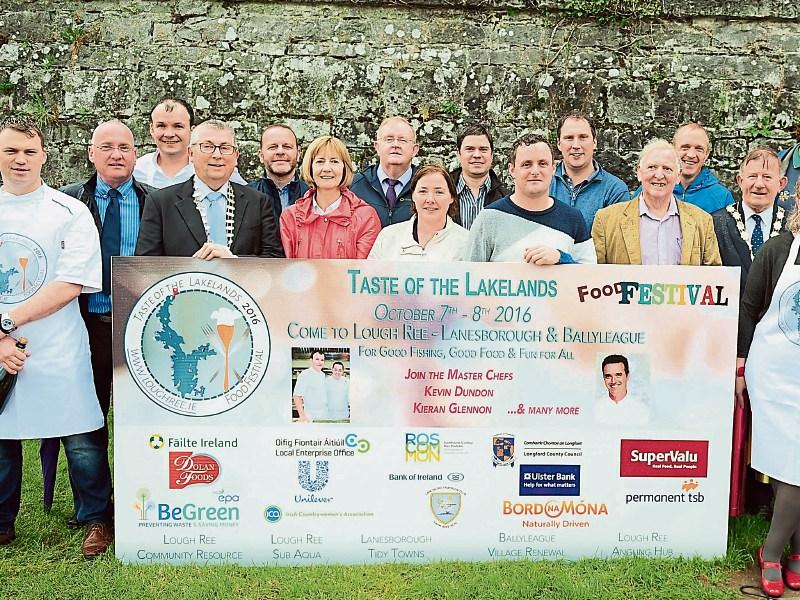 The rain may have fallen in its bucketloads in Lanesboro last Wednesday, but that failed to dampen spirits among interested onlookers at the launch of the 2016 Taste of the Lakelands Food Festival.

Set over two days (October 7-8) it’s anticipated as m any as 60 local food producers will descend on the south Longford town in an effort to throw the spotlight on Co Longford’s culinary clientele.

Organisers hope  its inaugural staging will provide the perfect backdrop to the World Fishing Championships which will take place from October 5-9.

And while last week’s press launch on the banks of Lough Ree was far from ideal from a climatic point of view, the occasion was well received by those in attendance.

Ciaran Mullooly, PRO of  Lough Ree Angling Club who have organised the event, said the two day carnival was more about showcasing  the area as a leading food destination.

“The bigger picture is more about establishing in people’s minds that Lanesboro/Ballyleague is a good venue for food, its production and sale,” he said.

Looking out at the Lough in the foreground of an inflatable flying pig, Mr Mullooly joked that should the festival be a success, the sight of flying pigs would become commonplace in the greater Lanesboro/Ballyleague area.

“We have got 40 at the minute, so I don’t think there will be any bother in reaching that.”

Also in attendance were local chefs, Paul Horohoe, Kieran Glennon, head chef of Dublin’s only Michelin two star restaurant, Patrick Guilbaud and Gary O’Hanlon of Viewmount House. Celebrity Chef Kevin Dundon is one of the other big names who will be taking part in festival.

Like RTE’s Midlands Correspondent before him, it was Mr O’Hanlon who extolled the virtues behind the October initiative.

“I felt since moving to Longford eight years ago, the midlands, Longford, Roscommon, Leitrim has been greatly ignored but I have been involved in a good few of these events and I just feel this will really kick it off,” he said.

Stands for the Festival  will cost just €30 each. To book contact   Alan Horohoe at 086 8454125 or call to  Lough Ree Angling Hub Office in Ballyleague (opposite Sorohan’s) or email tasteofthelakelands@gmail.com.