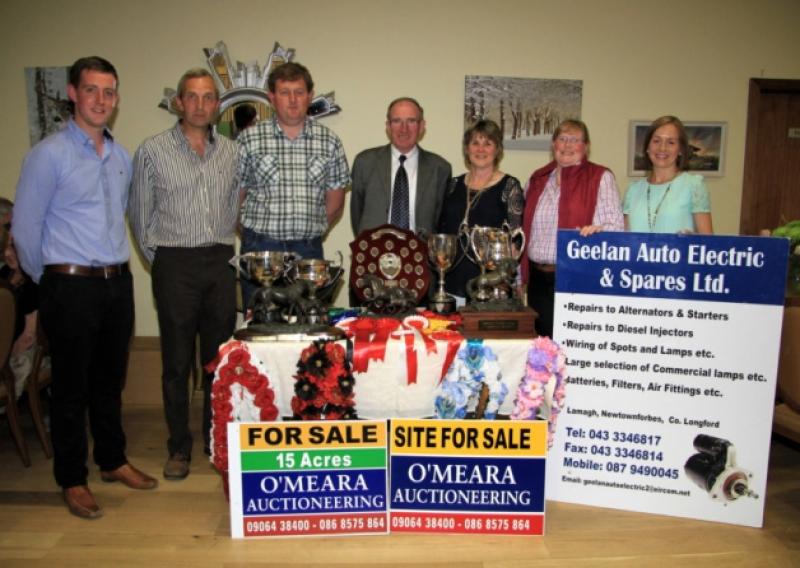 The countdown to the County Longford Show and Country Fair is well under way and preparations are in full swing for Sunday, July 5, next.

The countdown to the County Longford Show and Country Fair is well under way and preparations are in full swing for Sunday, July 5, next.

This year the event, which is being held on the lands of Seamus and Bernadette Farrell, Moydow, will be officially opened and blessed by Bishop Francis Duffy.

The launch took place last week and organisers and sponsors were out in force to promise that this year’s show will be an absolutely wonderful day out for all the family.

Secretary, Bernie Whyte outlined details of the numerous livestock classes that will feature at the show and she also highlighted the very popular horse and pony jumping sections.

“This is our first Sunday show,” she said, before adding that it took two years to get the event secured on a Sunday.

“We are expecting a great crowd this year, and we are hopeful that the weather will hold out.”

Now in its 114th year, Longford Show has gone from strength to strength since its inception and has firmly established itself as one of the top shows on the Island of Ireland.

“We have always been very well supported by exhibitors because of the fact that Longford Show is regarded as one of the best,” smiled Ms White.

“Many of the people who qualify at the show go on to win All-Ireland titles, so we are really looking forward to a fun-filled day out for all the family to enjoy.”

There are a number of new additions and one of the highlights is the Farm Safety competition, which is being run in conjunction with Catkins Nursery and Co Longford Childcare Committee. The aim of this event is to raise awareness among young children of the importance of safety on the farm.

“We are also having flower demonstrations by Ann Murphy and three cookery demonstrations which will be done by three newly qualified chefs who attended the catering programme at Longford’s EDI Centre,” Ms White continued.

“EDI is currently recruiting for the next programme and there are still a number of vacancies, so if anyone is interested in participating, Brenda Greaves is the person to contact.

“On the day, our special guests will be the Children of Chernobyl and singer Sharon Turley will provide the entertainment alongside Celtic Blondes.”

For more details, check out Longford County Show and Country Fair on Facebook or the show’s website:  www.longfordshow.ie.

See next week’s Longford Leader for full details about this year’s show.