Curtain up for ‘Oliver!’ musical 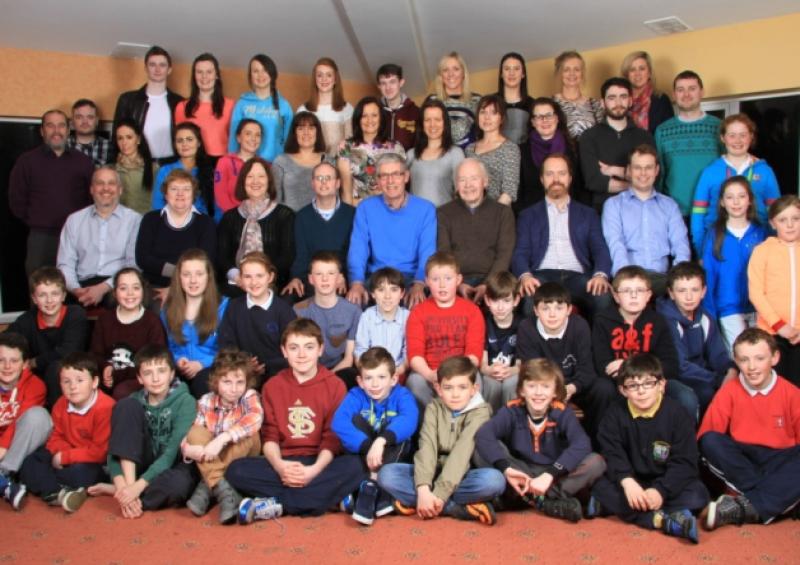 After months of hard work and preparation, the curtain will go up on St Mel’s Musical Society’s 2014 production this Friday (8pm), April 4.

Presenting family favourite ‘Oliver!’, the group have been putting the finishing touches on the production ahead of this Friday’s opening night.

“It’s the same every year,” she explains, but happily reveals that “the jigsaw puzzle is beginning to come together.”

With a cast of almost 60 due to take to the stage this Friday night, some tremendous work has been put in behind the scenes to put on the best show possible.

“It’s a family show from start to finish,” June continues. “Everyone likes to put their own twist on it, and our director, Paul Norton, has gone the extra mile.”

The music, meanwhile, will be “amazing”, June reports. With a nine piece orchestra led by Musical Director/Chorus Master Fintan Farrelly, and a very talented cast, the audience are in for a real musical treat!

June also mentions choreographer Emer O’Brien, commending her for the incredible work put in over the past few weeks and months. “We are very grateful to her for doing this,” she states.

The cast features 24 children (including Jack Oates and Dylan Murray as Oliver and The Artful Dodger, respectively), a move which was unprecedented, even by the society!

“We started off and we said we’d have maximum 15 kids, but so many kids turned up to audition,” June tells the Leader. “The kids have been great, they really are going to be superb. They’re putting so much energy into the production!”

This will be the second time the society has performed the hit musical, as ‘Oliver!’ was first brought to the stage by the local group in 1992 in the Temperance Hall. This season, twenty-two years on, five original cast members will return to the stage in different roles.

When he was twenty-one years of age, Benny O’Brien assumed the role of Bill Sykes back then. He returns this year to play Fagin. Likewise, the role of Fagin was brought to life by St Mel’s Musical Society stalwart John Kelly in 1992, and this year, John will return to the stage as Mr Brownlow. In 1992, Widow Corney was portrayed by Pauline Sheil, while Lorraine Fay was a dancer in the show. Now, the ladies will also feature in the cast list in the roles of Old Sally and Mrs Bedwin respectively. Finally, an orphan in the first production, the talented Liz Leavy is the only one of the original children’s group to take on the musical a second time, this time playing the role of Mrs Sowerberry.

The cast is rounded up with Lyndsay Clyne stepping into the role of Nancy, while Tony Wadd will play Bill Sykes. The roles of Mr Bumble and Widow Corney will be taken on by Dermot Deely and Christine O’Brien.

Nearing completion after a lot of hard work, the set is shaping up to be the best one yet, designed by Eddie Kiernan and Robert Belton. “From the point of view of production or sets, our shows usually cost around €60,000,” explains June. However, Robert and Eddie offer their services for free, reducing the potential costs dramatically. June adds that “you couldn’t quantify in money” the time and expertise put into the set along with all the other hard work that goes on behind the scenes in the different departments.”

As the society prepare to take their 2014 production to the stage, June adds a word of thanks to their sponsors, without whom the show would not take place. “We wouldn’t be able to put this show on if we didn’t have the continuous support of our generous sponsors.”

June also extends thanks to the committee “for putting in such a great effort”.

An iconic musical in its own right, ‘Oliver!’ promises to be a great night’s entertainment for all ages and tastes. ‘Oliver!’ will run at the Backstage Theatre for a total of nine performances from Friday, April 4 to Saturday, April 12.

The show will start nightly at 8pm, with the exception of the Sunday matinee show on April 6 at 3pm.

As if any further incentive was needed to see the show, there is also a concession of €15, and a family ticket, which costs €60 for a family of four. Concessions are available on Sunday, April 6; Monday, April 7 and Tuesday, April 8. Immediate booking is advised.