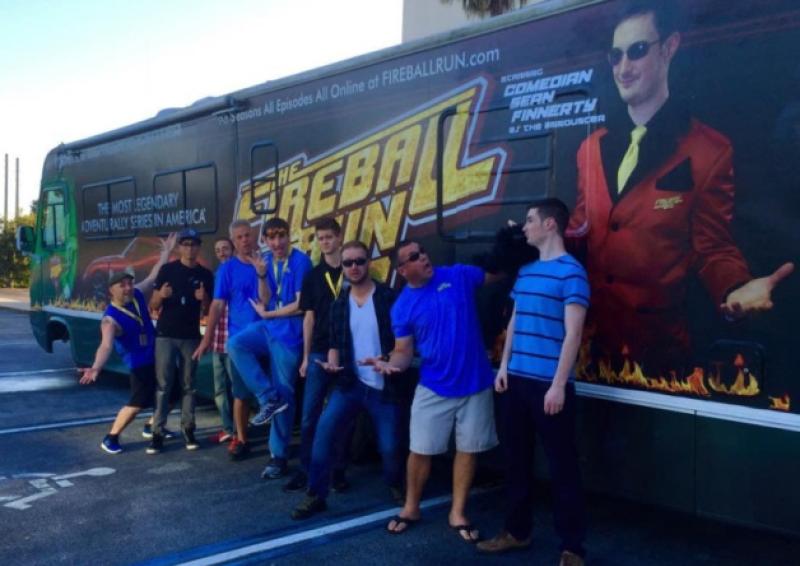 Longford native, comedian Sean Finnerty is not literally on fire but he is certainly heating up the comedy and entertainment scene across 14 American cities.

Longford native, comedian Sean Finnerty is not literally on fire but he is certainly heating up the comedy and entertainment scene across 14 American cities.

Fresh off his recent Comedy tour, “The Under Cover Comedy Tour”, Sean jumped into The American Fireball Run, which recently saw its last day of filming in the States. The show will be on international network TV and, more interestingly for Irish viewers who want to check out Sean’s Hot cross buns, on Netflix in early 2016.

If you’re a comedy fan, you may have already caught one of Sean’s shows in one of the many popular stand-up spots around Ireland. Galway holds a soft spot in Sean’s performing history.

Sean has also begun to make roads in the stand up comedy scene in the USA. Having performed at the New Orleans Indie Comedy Festival last year, he will do so again this year and is planning to add the famed Boston Comedy Festival to his CV.

Talking about his latest project, Sean explained; “It’s called fireball run. Here are the main points: it streams live on www.fireballrun.com. The show has distributors (TBC) in Europe, South Africa and India, and will be airing on Netflix early next year. Eight days, 14 cities, 50 teams 2000 miles.”

Described as ‘the most legendary adventure-rally in America’, Sean went on to add that the show is “a life-sized trivia game with America as the game board. Teams do different challenges for points, and the team with the most points at the end wins. Teams compete for glory, bragging rights and a plastic road sign.

“It’s also the largest concentrated effort to recover missing children in America. Each team gets 1,000 flyers to distribute throughout the course of the eight days. So far, Fireball Run has aided in the recovery of 44 missing children since its conception in 2007.”

Not only is Sean getting to rub shoulders with some of America’s most recognisable faces, such as Shooter McGavin, the bad guy in Adam Sandlier’s ‘Happy Gilmore’, but the project is really making a difference to the families of missing children all over America.

The Killoe-born comedian is counting his blessings as he gets to indulge in working at something that makes such a huge impact on so many people’s lives. On the other side of it, he also appreciates how much he a nd the other contestants will actually have seen by the end of the show.

“The show is also a once-in-a-lifetime opportunity as the contestants get to see and do things a lot of people never get the opportunity to, like holding John Wilkes Booth’s gun,” Sean added.

Of all the wacky ideas for reality shows, this has to be one of the best spirited, and boy, does it look fun, but while the glitzy and admittedly very cheesy-looking show will make great television, the most important fact is that it will change lives. As for Sean, he’s enjoying every minute of it.

Check out the website and watch Sean do his thing in Netflix early next year.