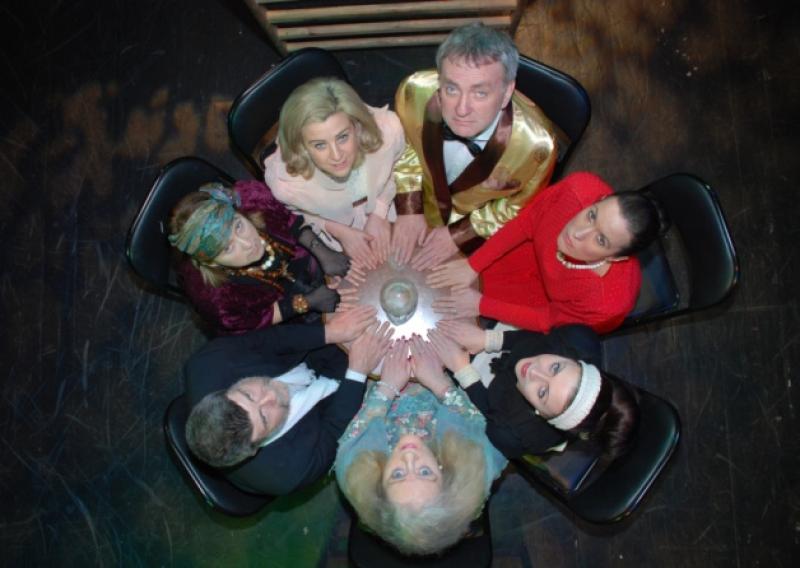 It’s an exciting time for Backstage Theatre Group, as they prepare to bring their first comedy in more than ten years to the stage later this month.

It’s an exciting time for Backstage Theatre Group, as they prepare to bring their first comedy in more than ten years to the stage later this month.

The spring production will see a cast of seven take on one of Noël Coward’s best-loved plays, ‘Blithe Spirit’.

Speaking as rehearsals continue for the highly-anticipated show, director Ollie Kenny explained the plot of the play.

“The principals in the play are the Condomines; Charles Condomine, played by Declan Neville, and his wife Ruth, played by Christine O’Brien,” Ollie told the Leader.

“They invite their friends Dr Bradman and his wife around to conduct a séance with Madame Arcati.

“Madame Arcati is a psychic, she’s a medium, being played by Maureen [Dunne],” Ollie continued.

In the course of the séance, which was organised by Charles as research for his latest book, Madame Arcati accidentally conjures up the ghost of Charles’ first wife, Elvira. “She died young and the ensuing battle between herself and Ruth for Charles’ affection is hilarious,” said Ollie. There is a twist, however: Charles is the only one who can see and hear his jealous, temperamental first wife!

Rounding up one of the most experienced casts that the Theatre Group has to offer, Declan, Christine and Maureen will be joined by John Kelly and Eileen Murphy in the roles of Dr and Mrs Bradman; Liz Leavy as Elvira and Vanessa Flood, who plays the role of Edith the maid.

Described by Ollie as ‘a beautifully crafted play’, Blithe Spirits was suggested to him at a Drama League of Ireland meeting, and quickly taken on board by the group after a read-through.

“We just thought this is something that our audience would love,” Ollie continued. “It’s a period piece. It’s a really, really clever script, very funny. [There are] some hilarious moments in it.”

Set and costuming for the play are “beautiful” Ollie added, though it’s a departure from the plays that BTG have done before.

All in all, it’s a huge challenge for the group, but one which they enjoy.

“There’s an old adage that you hear adjudicators and you hear commentators say, that comedy is the most difficult form of theatre to do,” Ollie pointed out. “And they’re dead right, it is. It’s really, really hard work.”

Admitting that it’s the most work he has ever had to put into directing a play before, Ollie revealed that the same could be said for the cast. “The cast are finding it really, really tough, but we’re loving rehearsals.”

BTG will bring Blithe Spirit to the Backstage Theatre from Wednesday, February 18 to Saturday, February 21 at 8.30pm. Tickets cost €15/€12 for the shows on February 19, 20 and 21, but a special reduced price of €10 will apply for opening night, February 18.

Tickets are now available from the Backstage Theatre on 043 33 47888, online at www.backstage.ie or from Farrell & Coy.