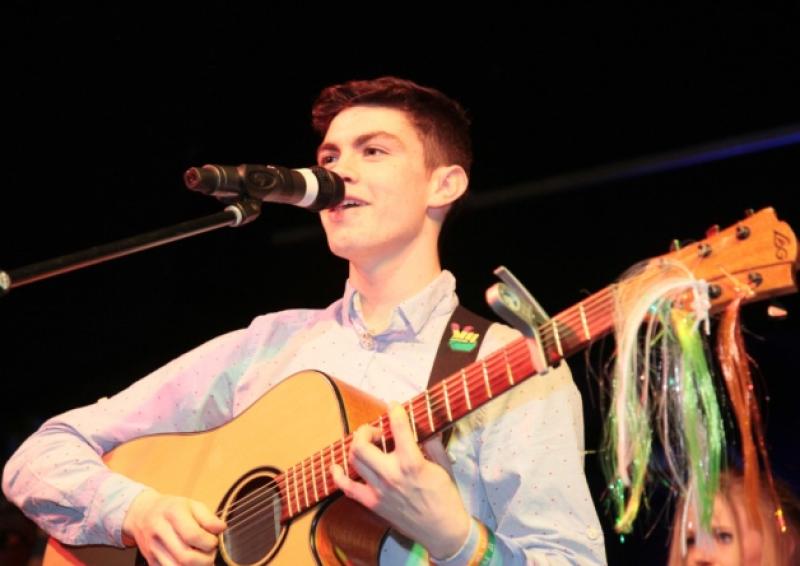 Fans were treated to an amazing spectacle as the six finalists performed along with last year’s winner Eamon Keogh.

Jim Maher, MC, introduced each of the acts, and as in the heats, each performed twice, with one song being by an Irish artist and the other being the artists’ own choice.

The dapper-looking trio ‘Reprisal’ sent temperatures soaring with their rendition of ‘Whiskey In The Jar’ originally sung by ‘Thin Lizzy’. After a snazzy costume change, they belted out the classic ‘Are You Gonna Be My Girl?’ by Jet. Judge Shane Kennedy commented that the boys “do rock n’ roll so well”.

Niamh and Roisin or Niro, as they were known throughout the competition, commenced their performances with Kodaline’s beautiful song, ‘All I Want’. The girls moved on to their second song which was ‘Latch’ by Sam Smith, a well-known hit that was perfectly sung. Judge Liz Leavy praised their strong harmonies and unique sound.

Nessa Brady lifted the crowd with an upbeat old school classic, ‘C’est La Vie’ by B*Witched. She then toned it down a bit by singing ‘Read All About It’ by Emeli Sandé, where she impressively hit all the high notes!

Another Kodaline hit was performed by the extremely chilled-out Adam Fenelon. With his great smile and relaxed manner, he got a very flattering comment from Judge Liz Leavy, who said, “you could make a CD and I would listen to you all night”. Toning down the atmosphere, Adam sang the extremely well known hit ‘Give Me Love’ by Ed Sheeran.

Duo Maryanne and Paddy sang an Irish classic ‘Belfast Love’ and their performance was described by the judges as “soulful, versatile and with a fabulous emotional aspect”. Just as they did in the semi-final, Maryanne and Paddy generated a mash-up of some Mumford and Sons hits. They had a good connection as a duo and the audience really enjoyed their style.

Tomás Skelly was last to take to the stage and his superb guitar skills were showcased as he kicked off with ‘Dreamer’ by Ryan Sheridan. He then blew the audience away with ‘Only Love’ by Ben Howard. Judges commented on the excellence of his performance and his passionate facial expressions.

After the votes were counted, Jim revealed the winners to a hushed and expectant crowd.

In third place and receiving a cash prize of €200 was Paddy and Maryanne, while Adam Fenelon was announced as runner-up and he received €300. The grand prize of €1,000, a beautiful trophy and title of 2015 champion went to Tomás Skelly.

All performances from this year’s competition are available on The Attic Youth Café Longford’s YouTube channel, and we would like to thank Shane Crossan for offering his professional services in making this possible.

The organising committee wish to thank all the dedicated volunteers, Foróige staff, supporters, Youth Committee, funders and Longford Credit Union for all their continued support with the competition.

If you have any queries about the event or if you wish to volunteer with the Attic or Foróige please contact Ruth Mc Garry Quinn at torccafefoodhall@yahoo.ie or 087 2626806.