A change of scenery for artists 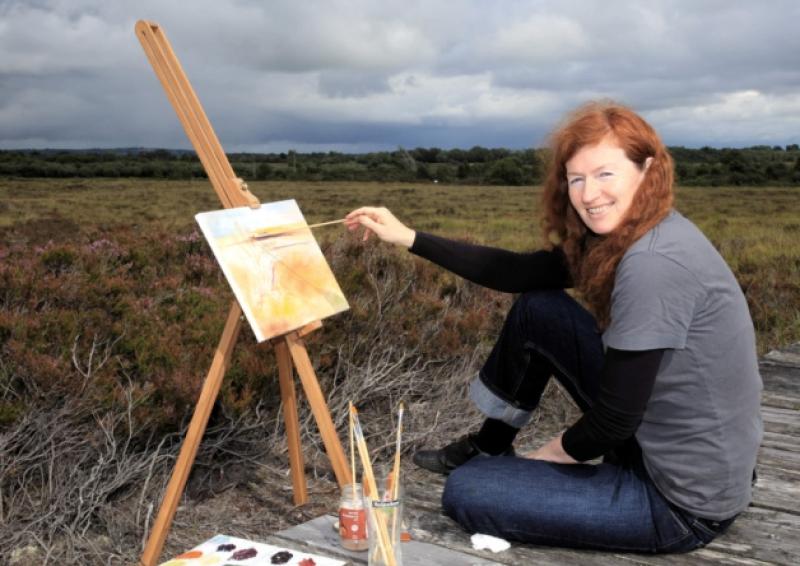 The Old Days Old Ways festival got off to a beautiful, tranquil and artistic start on Monday, August 12, with artists taking in the sights and colours of Corlea bog.

The Old Days Old Ways festival got off to a beautiful, tranquil and artistic start on Monday, August 12, with artists taking in the sights and colours of Corlea bog.

Hosted by renowned UK-based artist Lucy Brennan Shiel, artists of all abilities were invited to join in the workshops over three days, drawing on the bog landscape for inspiration, something which Lucy herself does when it comes to her own artwork.

“It’s another secret that isn’t being exposed enough” says Curraroe native Lucy, who has been working from the bog since 2000, adding: “People don’t appreciate this landscape.”

Lucy admits that many of the artists who turned up to the workshops had never painted outside before, as they felt that there was no difference between painting from a photograph, and actually being out there in the bog.

Though Lucy says the London audience crave such pieces inspired by the bog, she admits that many Irish will take it for granted, and even maintain that it is useless. “I know why people feel like that, for them, it’s useless and it’s disempowering as a professional”, adds Lucy, explaining that farmers may see the bog as useless, as nothing could grow on it. The artist also explains that many people have now normalised the thought that it is okay to “obliterate” the bogs. “It’s worth preserving, we shouldn’t keep working against it” Lucy implores.

County Librarian, Mary Carleton Reynolds was delighted with the event, and, along with Lucy, hopes that it will become an annual date in Longford’s diary. “It’s wonderful to be able to bring someone like Lucy to Longford to get her to share her expertise with our artists,” Mary said, adding “it’s lovely to see the reaction of people and the inspiration they get from the bog.” Mary explained that of all the Longford artists who turned up to participate in the painting workshops, only one had previously visited Corlea, but all were very impressed by the beauty of the bog. Mary also thanked the staff in Corlea and the OPW for the use of their facilities.

The artists who took part in the workshops thoroughly enjoyed the experience, with some who attended on the first day returning to Corlea to participate in the rest of the workshops. Karen Brennan, one of the participants said, “It’s a new experience, I felt enriched personally by it” adding that she would love to repeat the experience, and felt that the way had been paved for her to do so. Mary Wilson from Rooskey, who has been painting for the past 13 years, added that it was a “very very worthwhile” experience, explaining that though she had painted the bog before, the workshop had shown her different colours to use in the future.

The Old Days Old Ways festival will continue right up until the end of August, with a number of events planned to celebrate Longford’s rich heritage. “It’s something that we can feel proud of, that we have such a rich natural heritage” Ms Carleton Reynolds concluded.