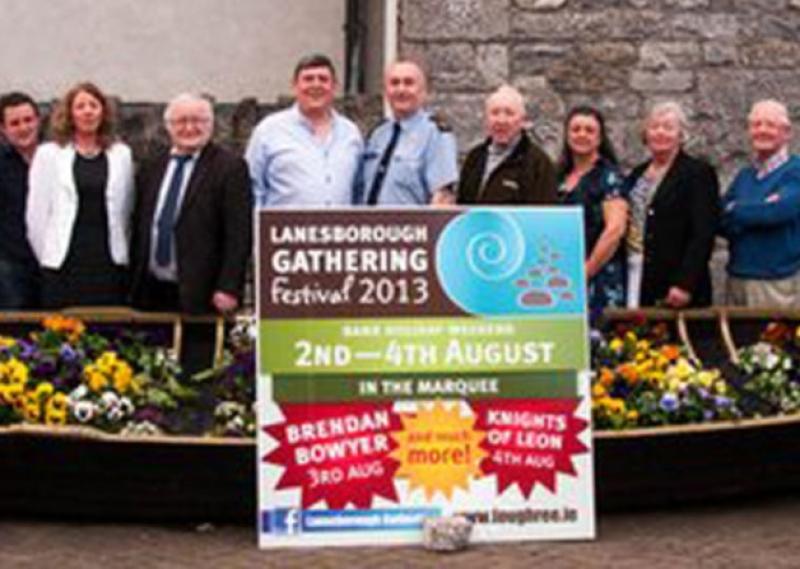 All is set to go with the Lanesboro Gathering Festival 2013 in the town of Lanesboro on the August Bank Holiday weekend.

All is set to go with the Lanesboro Gathering Festival 2013 in the town of Lanesboro on the August Bank Holiday weekend.

The festival, which is described as a ‘parish hooley’, welcomes past residents and even people with the slightest link to Lanesboro to the town over the weekend. The town also welcomes everyone that wants to come to join in and share the Gathering celebrations.

The organising committee have worked diligently to put on a great festival for the community. The line-up of events is as follows;

On Friday August 2, the festival gets underway with music in the Parish Hall from 7pm with Jimmy Flanagan and his merry bunch of musicians. The festival will be officially opened at 7.30 in the hall, followed by an audio visual exhibition by Kieran Feeney. At 8.45 in the library, Bernadette Clancy will present her Historical Readings, and from 8.30pm to 10.30pm there will be a junior disco. From 11pm, join in the Meeting and Greeting, where Actin De Maggot will perform in the marquee.

On Saturday, August 3, events include an all day international fishing competition, a Nature Woodlands walk with Nature Conservationist Sue Moles, a tour of the Lough Ree Power Station, and music by the internationally renowned Brendan Bowyer.

To round up the weekend, Sunday’s events include Gathering Mass in St Mary’s Church, vintage car rally, boats in the bay, and family afternoon. At 9pm, Sean McGrath and his band will take to the stage, followed by Knights of Leon and a disco with local DJs.

Tickets for Saturday and Sunday night, priced €15, are available in O’Brien’s and as the numbers are limited it is essential that early booking takes place for what will be the hooley of the year in Lanesboro.