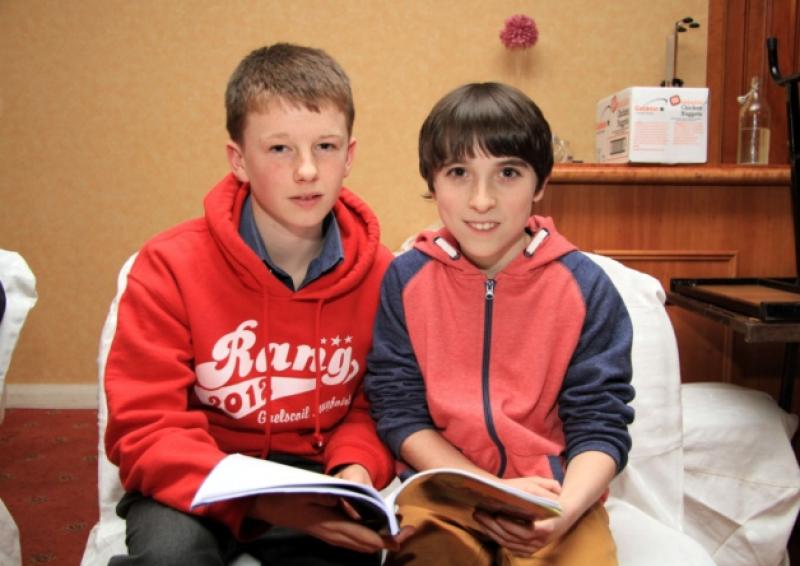 With just over a week to go until curtain up, the finishing touches are being put to the St. Mel’s Musical Society’s production of Oliver!

With just over a week to go until curtain up, the finishing touches are being put to the St. Mel’s Musical Society’s production of Oliver!

For the first time in ten years, the musical calls for a minor in the lead role, and it’s 13-year-old Jack Oates who is stepping up to the plate with much enthusiasm. Though only his second show with the group (having performed with the children’s chorus in ‘Carousel’), Jack’s links to the society run further than that. His mother, Paula, has been a member for many years and appeared in numerous shows while his sisters; Amy, Alison and Andrea, have also tread the boards with the society, with Andrea taking the title role in the society’s production of ‘Annie’ in 2004. Amy, meanwhile, will join Jack on stage in ‘Oliver!’ as part of the chorus.

A daunting task for many, taking the lead in the production doesn’t phase Jack, and he admits that he is “thrilled” to have landed the role of Oliver. Explaining that rehearsals are “a lot of fun”, Jack compliments new director Paul Norton for his role, adding that he is “very excited” to perform with the musical society.

At the tender age of 13, the first year St. Mel’s College student already has a wealth of experience behind him. A keen guitarist, Jack was one of a select few to be chosen to perform on the Late Late Toy Show in 2012, when he stunned viewers all over Ireland with his talent. Jack also plays the piano and is on Grade 6. He was a recipient of a Royal Irish Academy of Music High Achievers award in 2011, and played at the awards ceremony. “It was very good” Jack says. “I played on a grand piano!”

As a member of the National Children’s Choir, Jack was selected to perform at the National Concert Hall, and, most recently, the Longford teenager performed at his school’s Christmas Concert, to much acclaim.

A huge fan of Ed Sheeran and Kodaline, Jack admits that he doesn’t have a particular preference in music, and loves listening to, singing and playing music of all kinds. When not playing music, Jack explains that he enjoys playing both golf and hurling, but has taken a break to focus on the musical.

Jack’s friend Dylan Murray will assume the role of the Artful Dodger, and Jack admits that he enjoys acting opposite his friend. “I’ve known him a long time” Jack continues. “He has good stage presence!”

Hoping to become a famous actor when he’s older, Jack’s advice to any of his peers who are hoping to pursue performing arts is to, “Work hard at it. Practice makes perfect”. “If you can’t learn a song, don’t give up, just keep trying ‘til you get it” Jack adds.

Looking forward to the show, Jack concludes; “I hope it’s a good show and that everyone enjoys it!”

Led by Director, Paul Norton, Musical Director, Fintan Farrelly and Choreographer Emer O’Brien, the cast of almost 60 continue to rehearse for the show which starts next week.

The production takes place in the Backstage Theatre, Longford from Friday, April 4 until Saturday April 12, a total of nine performances. Curtain nightly at 8pm, with the exception of the Sunday matinee show on April 6, which will begin at 3pm. Tickets are available from the Backstage Theatre Box Office at 043 33 47888; online at www.backstage.ie; or from Farrell Coy.