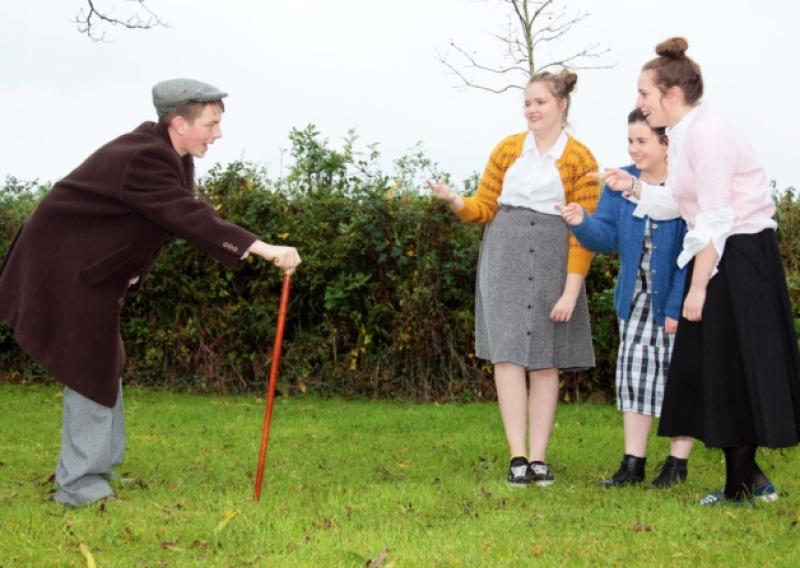 The Transition Year students of two Longford schools have taken over the Backstage Theatre in preparation for their production of Tarry Flynn.

The Transition Year students of two Longford schools have taken over the Backstage Theatre in preparation for their production of Tarry Flynn.

Students of Meán Scoil Mhuire and St Mel’s College have just two weeks to go until the show hits the stage, and preparations are in full swing.

In a new take on the Backstage Theatre’s traditional community production, the students have been working on every aspect of the show, from acting and playing music to designing the poster and programme.

Being led by Padraic McIntyre, the students started off by visiting the theatre before taking part in confidence-building workshops.

The students were then given the opportunity to audition for parts in the play, which resulted in the casting of more than forty students.

“To our surprise, the vast majority of them wanted to be onstage, which is tricky,” Padraic explained, adding that they came up with Tarry Flynn in the hope that in some way it might be linked to their Leaving Cert course.

An adaptation by Conall Morrison of Patrick Kavanagh’s novel, Tarry Flynn is set in Co Cavan in the 1930’s. It tells the story of Tarry and his quest for big fields, young women and the meaning of life.

So far, the students have been enjoying the experience, and most are looking forward to treading the boards. Adding that it should be fun, St Mel’s College student Ben Ryan quipped, “we’re all drama queens,” to which his classmate Daire Ó’Muirí laughed, “there’s one or two kings as well!”

The hardest part, according to the actors, is learning the lines, but with rehearsals taking place every day, the students are working hard to perfect their parts.

Students from both Scoil Mhuire and St Mel’s are providing a live soundtrack for the play too, while a group of around seven students have been tasked with putting together costumes for the mammoth cast.

On the other side of things, students are also working hard at promoting the event, with a stunning poster already created for the play. Molly Sheridan of Meán Scoil Mhuire is the photographer for the production, and she admitted that seeing the photograph she took on the promotional poster is ‘a bit weird’. Molly will continue to work behind the scenes, taking photographs and a video, which will be uploaded to Youtube.

Meanwhile, Eoin Jones of St Mel’s College helped put the poster together and is now working on the programme, and with such a large cast to name, it’s no easy feat.

Though he admits that the whole process can be quite intense and stressful for all involved, Padraic said, “There have been no discipline issues - they’re as good a bunch of people as I’ve ever worked with.”

Of course, with such a large group of students, it is an overwhelming task, but as General Manager of Backstage Theatre, Mona Considine stated, “when they’re up there rehearsing, they give it their 100%.”

“I’m lucky now, the people who stood up to the plate and wanted to play the leads are, I think, really beginning to come strong,” Padraic revealed.

Indeed, everything is beginning to come together well and already, the students have learned a lot about what it takes to put on a show.

“If they get anything [out of the experience] they’ll realise the commitment it takes onstage to sell a story to an audience,” Padraic stated.

“I think it’ll be exciting,” he added.

Stating that the whole production is a group effort - both onstage and backstage - Mona concluded, “It’s about them [the students] and ultimately what we want is that they have a good experience and that the audience enjoy the production.”

Tarry Flynn will be performed from November 12 to 15. The matinee shows have already sold out, but there are still tickets left for the 8pm shows on Friday, November 14 and Saturday, November 15. Tickets cost €12/€7 or €35 for a family of four.

For more information or to book your tickets, call the Backstage Theatre Box Office on 043 33 47888 or visit www.backstage.ie