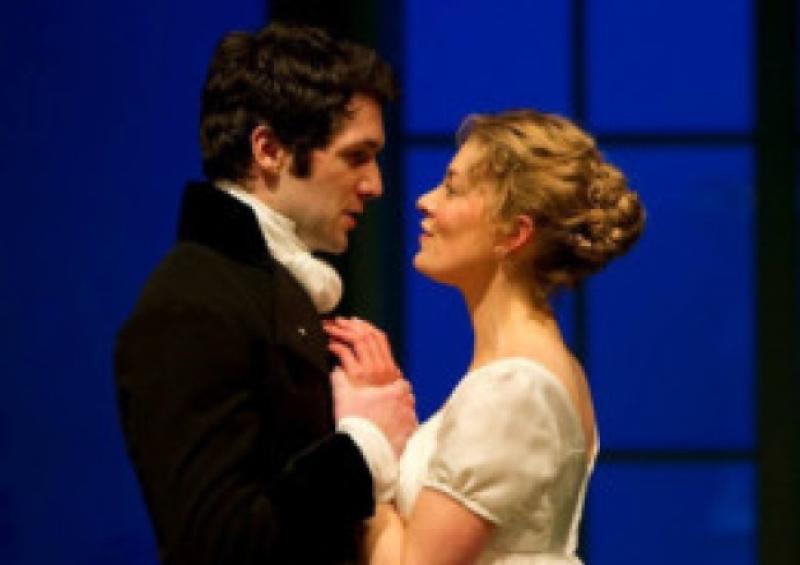 As the Jane Austen classic ‘Pride and Prejudice’ celebrated its 200th anniversary, Longford actress Lorna Quinn was preparing to take centre stage in The Gate Theatre’s production of the novel.

As the Jane Austen classic ‘Pride and Prejudice’ celebrated its 200th anniversary, Longford actress Lorna Quinn was preparing to take centre stage in The Gate Theatre’s production of the novel.

With an impressive array of roles already under her belt, both on screen and on stage, Lorna assumed the role of Elizabeth Bennett late last year.

Speaking to the Leader about her character, Lorna explains; “Elizabeth Bennett is the second eldest of five daughters. She is described in the book as having ‘a lively playful disposition’ and she says of herself that she ‘dearly loves to laugh!’”

“Elizabeth is a strong, independent woman that represents many admirable qualities that make her such a famous role model for women, even today,” the actress explains, adding that Elizabeth is unafraid to speak her mind, but is “compassionate and caring to those she loves, she is a dear and loyal friend and she is not afraid to admit that she is wrong.” Lorna also explains that Elizabeth has a very strong bond with her father, something which is evident in both the novel and the current production, but her bond with her mother is “that bit more fraught!”

“It was a huge compliment to be cast in the role,” Lorna says. The Longford actress set about preparing for the iconic role as soon as she was cast, re-reading the novel, listening to analyses of the book, and learning her script. “Bit by bit, I was gaining a deep understanding and knowledge of the character which hugely supported my work in rehearsals.”

“I am very aware of how dear the character of Elizabeth Bennett is to so many of Jane Austen’s readers. Audience members who come to see our production will already have their own very special relationship with Elizabeth from their reading of the book,” Lorna states.

“I hope that my portrayal successfully delivers on representing the much-loved qualities true to Elizabeth’s character and of course, on transmitting the love story with Mr Darcy.”

A work loved by many across the globe, ‘Pride and Prejudice’ celebrated its bicentenary last year. Already aware of the fans’ bond with the character of Elizabeth Bennett, the milestone anniversary didn’t throw the actress off. Rather than thinking about the “size of the part” or the novel’s anniversary, Lorna instead focused on bringing the role to life.

“I find it easier to take things day by day and not to look too far ahead,” she explains. “This prevents any hint of being overwhelmed by the role, or any fear of getting lost in all the publicity hype. Gradually, with each productive day in rehearsal, the production all fell into place. It is very much an ensemble piece, with seventeen actors in total. We are all crucial to driving the plot along - we cannot tell the story without one another - so whilst it may be primarily Elizabeth’s story, I do not feel the pressure of having to carry the whole story - It is a collective piece.”

It is perhaps this method then, that helped Lorna to take on some of the most iconic literary roles. Before being cast as Elizabeth, the actress had already played the title role in ‘Jane Eyre’, as well as Jo March in the classic ‘Little Women’. Though Lorna admits that fans’ knowledge and ideas of the character can sometimes prove to be a disadvantage, she looks at these parts in a positive way. With such well-known characters, there is infinitely more information at her fingertips when it comes to researching the roles.

“Not only have I the play to support me, but I also have the invaluable aid of the book when it comes to playing iconic roles such as Jane Eyre, Jo March and Elizabeth Bennett. The book contains so much background information regarding context, themes, relationships, character descriptions, location, setting and style. It is invaluable! I have most of my copy of ‘Pride and Prejudice’ underlined with high-lighter!”

Explaining how she gets into character, Lorna says that the gound work is carried out at rehearsals. In just four weeks, the cast prepare for the production and by the time week five arrives, the show is ready for the stage. To prepare herself each night for the performance, Lorna has her own routine.

“In order then for me to be physically and mentally ready for the show each night, I arrive to the theatre at 5pm,” she explains. “At The Gate, we have the luxury of getting our hair done each night. Once my hair is done, I rest for about forty minutes or do some relaxing yoga. By 6.30pm a lot of us are on the stage doing physical and vocal warm-ups. By 7pm we are all getting into costume and by 7.25pm we are all standing-by backstage ready to go on!”

Though well known for her theatre roles, Lorna has also earned a name for herself on screen, perhaps most notably for her character Lucy Mallon in RTÉ’s ‘Fair City’. Though she loves both theatre and television, there are huge differences between the two. When it comes to working hours, Lorna explains that in theatre, your work day begins when most are ending theirs. With filming, however, the schedule can begin very early in the day.

From an acting perspective, Lorna explains that both mediums are also “poles apart”.

“Acting for camera is on a much smaller scale, more contained with sometimes only a faint whisper required. It is also very technical in terms of continuity and making sure that you hit the right marks for the camera - you need to remember exactly what you did for each ‘take’ otherwise the people in the editing suite will be pulling their hair out!”

‘Pride and Prejudice’ will continue at the Gate Theatre until February 8, but there is plenty in store for the talented actress. Last summer, Lorna worked on a feature film ‘WILD’, which tells the story of the first woman to win a gold medal at the Chelsea Flower Show. Lorna plays the role of ‘Eve’ in the production, which is set for release later this year. Lorna will also begin rehearsals for her next production at the Gate Theatre, Oscar Wilde’s ‘An Ideal Husband.’

With an already impressive CV behind her and a bright future up ahead, the Longford actress says she loves acting both on screen and on stage. After her time on Fair City, Lorna returned to the stage, before getting the chance to work on a film. “You can never tell with acting, what route your career will go. You just surrender to it and let it take you where the opportunities lead” Lorna admits.

“It’s very difficult to plan anything, but I guess that’s what keeps me on my toes and ever ready for when the auditions and life-changing roles do arise!”