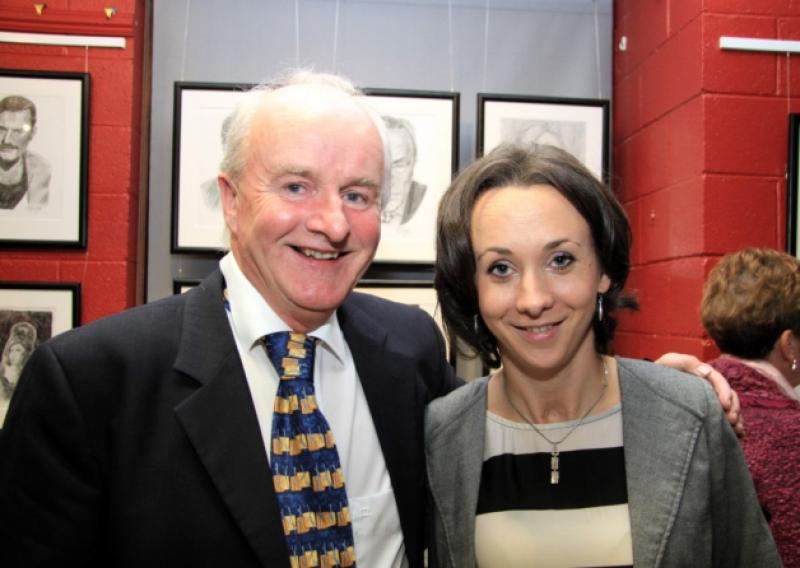 “There must be nobody at home in Killoe tonight”, joked County Librarian Mary Carlton Reynolds, as she spoke at the launch of Laura Doherty’s exhibition.

“There must be nobody at home in Killoe tonight”, joked County Librarian Mary Carlton Reynolds, as she spoke at the launch of Laura Doherty’s exhibition.

Though the crowd responded with laughter, the statement did have some truth to it, as family, relatives, friends, neighbours and even passers-by filled up the Longford Library on Friday last, October 11 to view the incredible works of art created by Laura.

For the past while, Laura has worked on portraits of famous faces including Seamus Heaney, Liam Neeson, Gay Byrne and Freddie Mercury. The masterpieces were on sale on the night, and there was also a bucket collection, with all proceeds going to the Jack and Jill Foundation and the Make A Wish Foundation. The exhibition was launched by local man Tiernan Dolan, who praised Laura’s work, courage and dedication, before presenting her with a friendship bracelet, made for her by the street children of Calcutta.

Special guest on the evening was Town Mayor, Cllr Paul Connell, who admitted that Laura’s portraits were “some of the finest work I’ve ever seen”, adding that “it’s great to be a Killoe native in Longford tonight”.

The kind words spoken by all were summarised by Mary Carlton Reynolds, who explained; “Laura has sketched some of her heroes, but I think the biggest hero here is Laura herself”.

To commemorate her launch, Laura was presented with a frame, containing four of her own favourite portraits. Laura’s godparents also surprised her on the night by reading poems by one of her favourite writers, Seamus Heaney.

Happily, it seems that Tiernan Dolan’s joked advice to “bag a bargain before it’s too late” was taken to heart, with portraits selling fast, and even a few commissioned. Speaking to the Longford Leader after the event, Ms Carlton Reynolds revealed that out of the 30 portraits on display, 27 were sold - an incredible achievement for any artist.

“I did not expect this crowd at all,” Laura admitted on the night, adding that this success may hopefully lead to a second exhibition.

Laura’s portraits will remain in the Longford Library for the next week, and all are welcome to visit and view the exhibition.