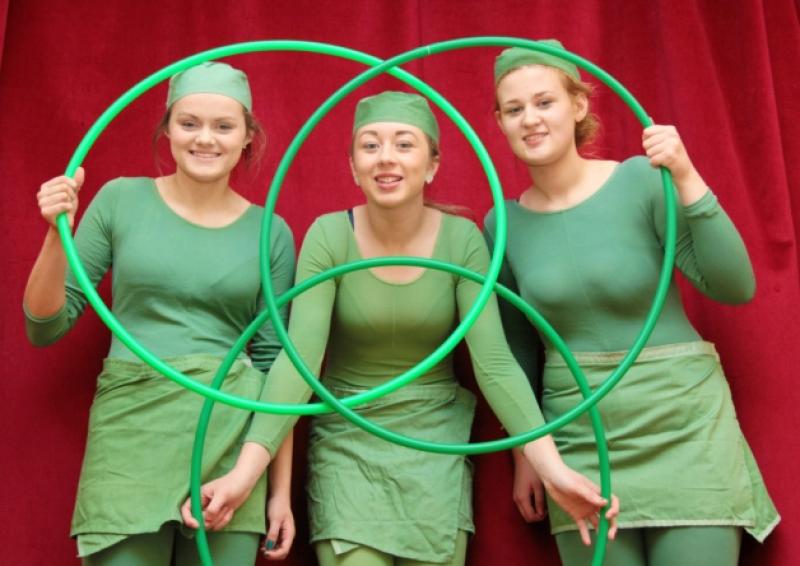 This modern musical comedy, penned by George Stiles and Anthony Drewe, is based on one of the world’s favourite fairy tales, Hans Christian Andersen’s ‘The Ugly Duckling’.

Through a mix of musical numbers, ‘Honk!’ takes the entire audience on a fun-filled, yet emotional journey, while leaving a subtle but wonderful message of tolerance and acceptance.

Ugly is born as a duckling but it soon becomes clear that he is no ordinary duck. He is mocked by all but his adoring mother, Ida. Ugly is cleverly brought to life by student Stephen Brady who hails from a family of well-known traditional musicians from Colmcille, while Ida is delightfully portrayed by talented vocalist Lynn Fox, remembered for her amazing rendition of Skyfall at last year’s Christmas concert.

Being larger (and therefore appearing more succulent) than his fellow ducklings, Ugly is pursued with vigour by the ever-hungry Cat (Ultan O’Hara). Consequently, Ugly finds himself lost on a nearby marsh in the middle of a duck-shoot and from there, embarks on an odyssey through the countryside, meeting a number of colourful characters and finding himself, and love, along the way. Among those characters are Ugly’s Dad, Drake (Dillon Butler); Ugly’s brothers and sisters played by Alana Jones, Rachel Cassidy, Laoise Cruise and Nicole Sheils; Turkey and Henrietta, Ugly’s school teachers (Feargal Lynch and Aoife Rogers - and there’s nothing quite like students playing teachers in a school production!); Grace (Gemma Finnan), a duck that is a cut above the rest, but a little lonely after her husband, became crispy and aromatic before his time; LowButt portrayed by Caoimhe Brady; Queenie played Danielle Kane; Bullfrog (teacher Owen Swaine); Dot and Graylag, interpreted by retired deputy principal Una Campbell and retired teacher Mick Conlon; and Penny (Caoimhe Brady).

‘Honk!’ is co-directed by music teachers Petrina Mills and Eimear Flanagan who have enjoyed the experience tremendously. They would like to thank students, teachers, friends and family for all their help and all sponsors for their generosity.

This fun-filled school production will take place at Cnoc Mhuire on December 17, 18 and 19. Tickets are available by calling 043 6686231 or the ‘HONKline’ at 085 8409506. Further information is available at www.cnocmhuiregranard.ie