2012 Granard Person of the Year announced 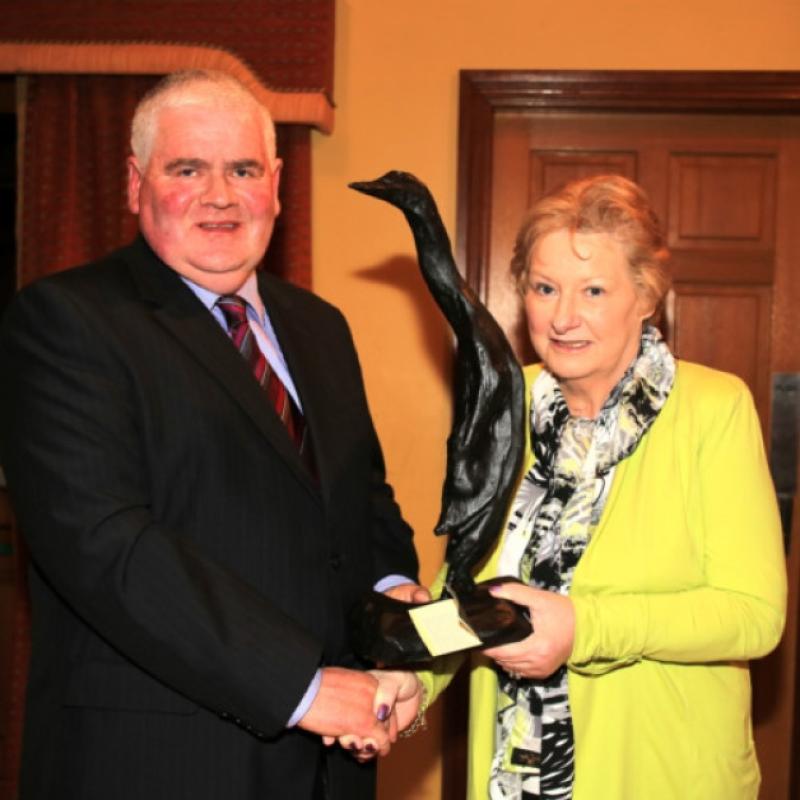 There was great excitement in Granard last Friday night when the much loved publican and former politician Carmel Fay became the town’s Person of the Year 2012.

There was great excitement in Granard last Friday night when the much loved publican and former politician Carmel Fay became the town’s Person of the Year 2012.

Originally from Dring, a few miles outside Granard, and a member of the Berry family who hold close connections to the international show jumping world, Carmel became deeply involved in the Granard community when she and her husband Paul bought Fay’s Bar in 1981.

“She was a big fan of St Mary’s GAA club and was always organising fundraising events for the club. She became deeply involved with the County Board and with knowledge and experience of the horse industry – she was fundamental to the planning of the Longford Race Day in Punchestown.”

Aside from being the smiling, friendly face upon arrival at Fay’s Bar, Carmel is probably best known in North Longford for her role in the local political arena – a part of her life that spanned the best part of 15 years having first being elected to Granard Town Council in 1994.

“Carmel retired from local politics in 2009, but not before holding her seat for three terms,” Cllr Reilly continued.

“Granard was always to the fore with Carmel Fay, and its development was always in her heart. In recent years, she was founder of both the St Patrick’s Festival and this year’s Easter Festival, both of which were a phenomenal success here in Granard.”

Due to illness, Carmel was not in a position to receive her award last year, so Granard Town Council made the decision to postpone it until such time as she was able to accept it. Therefore it was with great pride that all those who loved Carmel and knew her best, gathered at her popular watering hole in the picturesque north Longford town last Friday to honour her.

“Despite her ill health over the past year, Carmel continued to remain focused on Granard,” Cllr Reilly added. “It was her wish that Granard would win the Intermediate Championship, and that wish came true last September at Pearse Park. She has made an outstanding contribution to bettering the lives of all those around her, and indeed to making Granard a better place in which to live. It is both an honour and a privilege to present her with the 2012 Granard Person of the Year award.”