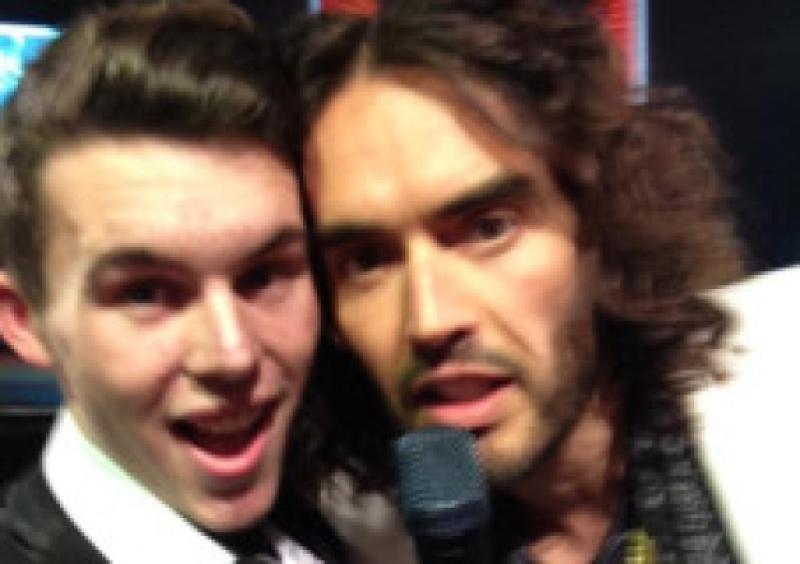 Lucky Longford teenager Darren O’Toole got the opportunity of a lifetime this month, as he joined his hero on stage.

Lucky Longford teenager Darren O’Toole got the opportunity of a lifetime this month, as he joined his hero on stage.

Longford town native Darren attended Russell Brand’s show in the Olympia Theatre, Dublin on November 11, and got the chance to join the well-known comedian on stage.

A huge fan of Russell’s for many years, Darren had gone to the airport earlier in the day with the hopes of meeting his hero. With him, he took a letter he wrote to Russell, a comic book he had written himself entitled “In love and lies” and two wristbands – one from Longford Comhairle na nÓg, and the other from the Roscommon Comhairle na nÓg. Unfortunately, Russell had arrived in Dublin the previous day.

At the show that evening, Russell announced that he was going to walk around the theatre. Darren admits he knew it was his last opportunity to meet his hero, so he took it.

Speaking about his experience, Darren said; “I got on stage because he turned on all the lights about 10 minutes into the show and said he would walk around.

“When he got down the steps into the audience I jumped out of my seat took the package out of my bag and walked down the aisle and said hello and gave it to him. Russell then put his arm around me and walked towards the stage.”

While on stage, Russell spoke to Darren, took pictures with him and made a few jokes. Darren even got a hug from the comedian before making his way back to his seat. As Darren returned to his seat, Russell began reading the letter, and appeared to be quite touched by the gesture.

“I had told him in the letter that I am a massive fan and that I hope he gets to read it and how he inspires me and that he is my hero” Darren explains. “I was very pleased he read it on stage because I got to not only give him the letter but I got to see him read it.”

After the show, the experience continued, Darren explains, as he was congratulated on the way back to his seat, received a number of tweets telling him that it was a very sweet moment and was even mentioned by a Dublin radio duo!

“I would like to say that it isn’t everyday you get to meet your hero and it isn’t every day you get to stand on stage of a sold out show with your hero” Darren says. Full of praise for Brand, he continues “Russell is a very intelligent nice man who took time out of his life to bring me on stage and talk to me. It’s nice to meet your hero, but it’s even nicer when your hero turns out to be one of the nicest [most] sincere people I’ve ever met.