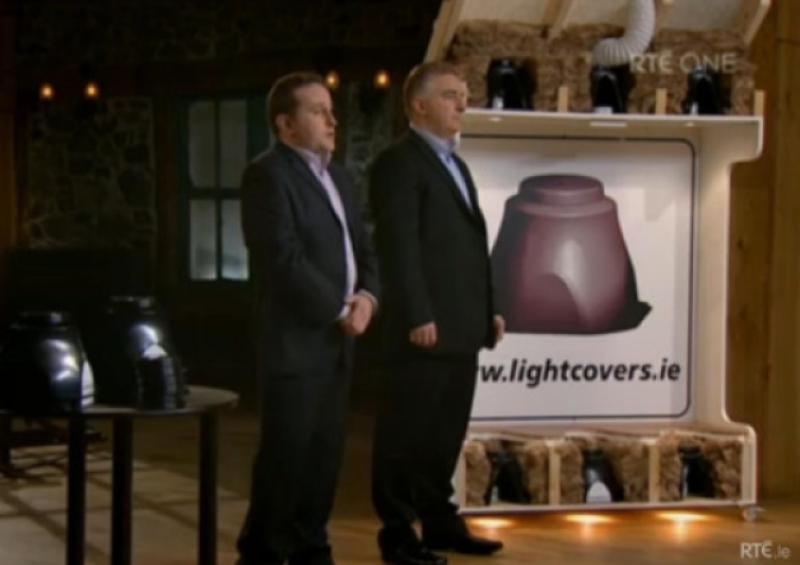 Two Longford brothers who designed a fire deterrent recess light appeared on Dragons’ Den last Sunday night in an effort to get some collateral to market their new product.

Two Longford brothers who designed a fire deterrent recess light appeared on Dragons’ Den last Sunday night in an effort to get some collateral to market their new product.

Brendan and Aidan Kelly who already run a successful home insulation business at Leitrim Cross, failed to secure the backing of the dragons, however since their appearance on the show, they have been inundated with enquiries about the product, not just on the domestic front, but from interested parties across the water in the UK and in France.

The brothers plan to harness the heat produced by ceiling lights with their Recessed Light and Extractor Fan Cover. “Basically the product is fitted above the recess lights; there is a problem in general with the overheating of light fixtures and lights also suffer from Thermal Turnoff, so our product prevents fires from breaking out,” Brendan told the Leader. “When people are upgrading insulation in their homes, there are mandatory EU regulations to have a product such as ours fitted. Our unit can also be used in conjunction with extractor fans and prevents them from getting blocked and subsequently overheating.”

Brendan and Aidan Kelly have spent the last four years designing their fire safety product and getting it to market. While they received a lot of support along the way, they also encountered obstacles. “We were concentrating on our home insulation business because of the economic times that we are in, so it took us about four years to get the unit to this stage,” Brendan continued. “We received a lot of support from Co Longford Enterprise Board, but we got no help from Enterprise Ireland. In fact if Enterprise Ireland had helped in in some way, it is very possible that we would have been able to move further with the unit. It is a new design and a new concept, but a necessity in every home.”

And while the brothers may be keeping tight lipped on a number of other products that they currently have at design stage, they are confident that if their recess light reaches projected sales figures, 15 new jobs could be created in Co Longford in the coming months. “The unit is being manufactured at Moulding Technology in Edgeworthstown - owned by two Longford mem - and if our sales figures are anything like we plan, at least 10 to 15 new jobs will created in Edgeworthstown,” a smiling Brendan added. “It would have been great to have a dragon come on board, but the response to the product from being on the programme has been unreal and we are looking forward to the outcome.”