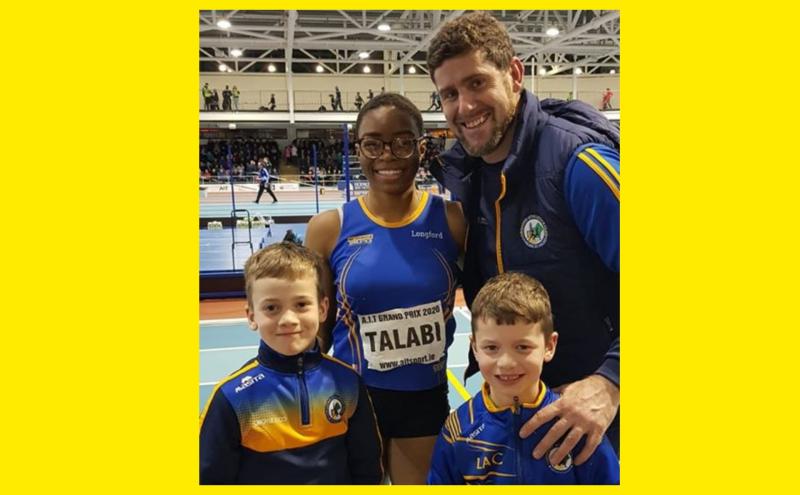 Yemi's 3rd out of her six jumps was her best of the evening, measuring 5.67m.

All eyes were on home crowd favourite Phil Healy (IRE) as she led the line in the Hodson Bay Group Women’s 200m. Healy ran a lightening time of 23:10 - the fastest run by a European athlete this season.

In doing so, she broke an Irish record held for 17 years by Ciara Sheehy. Healy beat off stiff competition from national 200m champion Jessica Bianca-Wessoly (GER) who achieved a time of 23.71.

In a feat of incredible endurance, crowd pleaser and Irish Olympian in the making Ciara Mageean broke her own stadium record, which was set in 2014, and an impressive personal best with a time of 8:48:27.

Current 1500m World Indoor champion Samuel Tefera (ETH) opened his 2020 campaign with an attempt at the World Indoor Mile record (3:47.01). Despite falling short of the record, he still led the race taking home first in the AIT Men’s Mile with a time of 3:55:86.

Starting strong Britian’s Adelle Tracey (GBR) led the pack in the Roscommon County Council’s Women’s 800m, maintaining the lead early in the race. Tracey, who achieved a time of 2:01:71, had a comfortable lead over second place Liga Velvere (LAT) who ran of 2:02:52. British athletes Ellie Baker and Mari Smith – who came third and fourth respectively – ran a tight race until the last bend with Baker being a hundreth of a second faster.

Former European Indoor champion and current Euro Indoor bronze medallist Asha Philip (GBR) ran a fast race in the Westmeath County Council Women’s 60m, clocking up a time of 7:23. Philip held off the best of the Irish sprint talent, including Ciara Neville, who came second at 7:33, and Joan Healy who was 0:01 behind her.

Andy Robertson (GBR) took home first place in the Wild Atlantic Apartments Men’s 60m with a time of 6:62. British 100m champion Ojie Edoburun, who made his AIT Grand Prix debut this evening , ran 6:64. Third place went to Jan Veleba (CZH) who was 0:02 outside his personal best.

The Athletics Association of Ireland Men’s 600m saw a battle of 400m, 400mH and 800m athletes as they faced off over an unfamiliar distance. Former world champion over the hurdles Dai Greene (GBR) and former European 400m champion Martyn Rooney (GBR) challenged but it was Poland’s Mateusz Borkowski who won the Men’s 600 m - setting a personal best of 1:17:40 in the process. Ireland’s up-and-coming Zak Curran took second place with a time of 1:17:66. Guy Learmouth (GBR) claimed third place with a time of 1:17:77. European medallist and home crowd favourite Mark English, for whom the 800m is a more familiar event, ran a time of 1:18:49 in a physical race.

Sponsored by Limerick Institute of Technology, the Men’s Pole Vault was one of the most entertaining events of the evening much to enjoyment of the home and international crowd. Norway’s Pal Haugen Lillefosse vaulted a height of 5:60m, earning him first place. Adam Hague (GBR) returning to the AIT International Arena, vaulted a height of 5:45m coming joint second with Spain’s Adrian Valles.