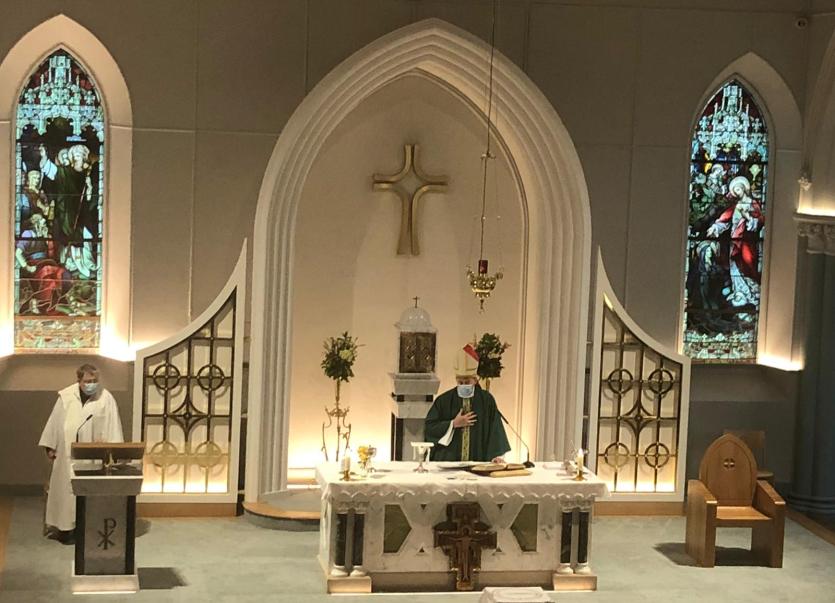 The picture shows Most Rev Francis Duffy, Bishop of Ardagh and Clonmacnois (centre), celebrating Mass at the Re-dedication of St Patrick's Church, Drumshanbo after its extensive renovations led by Fr Frankie Murray, PP, Drumshanbo. On left is Fr Tony Gilhooley, CC, Longford, a native of Drumshanbo who delivered the homily. A magazine/publication commemorating and celebrating some of the events of the 175 year history of St Patrick's Church, Drumshanbo up to modern times, is available in Centra and Gala supermarkets in Drumshanbo, and in Mulveys, Main Street and The Reading Room, Bridge Street, Carrick-on-Shannon. It is A4 in size and consists of 70 pages. Priced at €10, one hundred copies were sold on the day of its release in its two outlets in Drumshanbo

From April to the end of August this year, while Covid-19 Pandemic was starting to rage through society, major renovation work was carried out in St Patrick’s Church, Drumshanbo led by the vision and firmness of purpose of Fr Frankie Murray, PP, and by the hard-working  Murhaun Pastoral Council. (The Parish of Murhaun is the name of the Parish of Drumshanbo).

A new lay-out for the altar, the baptismal font, the choir galleries, access points, lighting, seating, toilet facilities, a disability access, a modern sound system, online broadcasting of ceremonies, etc. have been installed.

The major contractor for this challenging project was Shane McGovern and Staff, Drumshanbo, augmented by specialist workers in other spheres of work essential to the project that has produced admirable improvements in the functioning of the Church.

Church Re-dedication
On Sunday, October 4, The Most Reverend Francis Duffy, Bishop of Ardagh and Clonmacnois celebrated Mass during which he blessed and re-dedicated the newly renovated Church which celebrates its 175th Anniversary this year.

Bishop Duffy was assisted by Fr Frankie Murray, PP, Drumshanbo who both addressed the Congregation, as did Fr Tony Gilhooley, CC Longford who delivered the homily.

Sr Helen introduced the Ceremonial Proceedings, and Enda McGloin, as Chairperson, described the Pastoral Council’s involvement in the project. Because of Covid-19 restrictions, the congregation had to be reduced to fifty people. The three Choirs - Adult, Folk and Children – performed impressively, despite their seriously reduced numbers also.

Commemorative Parish Magazine (1845 – 2020)
To commemorate and celebrate the 175th Anniversary of St Patrick’s Church, Fr Murray suggested that we should try to produce a publication to coincide with such an auspicious occasion.

A small Editorial Committee was formed led by Padraig Kenny. Within three to four weeks, they and their many contributors produced a seventy page, A4 sized publication/magazine that chronicles some of the significant events and people to have tussled and merged to produce the Parish that we have today.