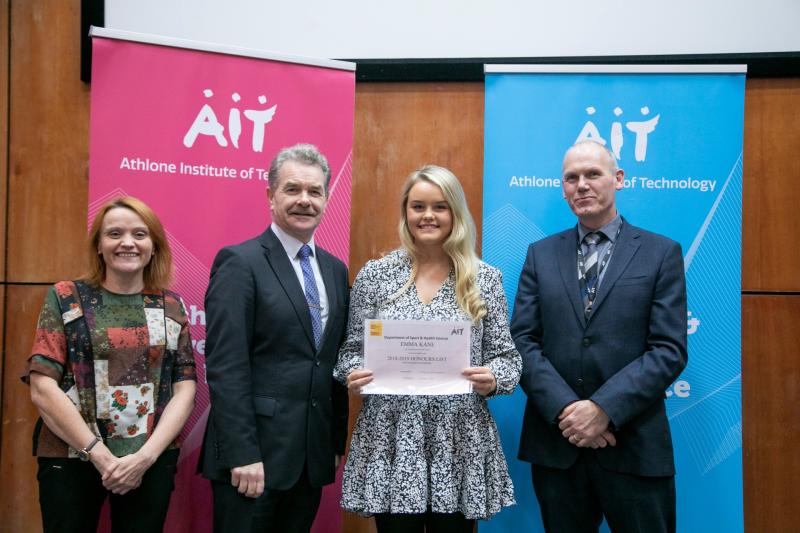 Edgeworthstown's Emma Kane was among thirty one students across Athlone Institute of Technology’s Department of Sport and Health Science who were recognised for their outstanding academic achievement this week at an annual ceremony intended to celebrate high achieving students in the company of their peers, friends and families.

Emma graduated last week from the institute's Bachelor of Science (Hons) in Nutrition with Health Science.

To be eligible for the award, all awardees are required to achieve a high cumulative grade average throughout their enrolment – more than 70% which equates to a first class honours.

Dr Aoife Lane, who heads the Department of Sport and Health Science at Athlone Institute of Technology, called the honour roll an important tradition that recognises the highest level of scholarly achievement across all years of study and said it is reflective of both the engagement and work ethic of students and the contribution of faculty.

“Facilitating and rewarding excellence in academia throughout the student life cycle is a positive and important affirmation for the students themselves, faculty and indeed the wider institute. We wish our students continued success in their academic endeavours and hope that this recognition further incentives them to continue excelling in their chosen fields of study,” she said.

President of Athlone Institute of Technology, Professor Ciarán Ó Catháin also commended the high achieving students on their outstanding scholarship and encouraged them to consider pursuing a master’s degree by research or a PhD following the attainment of their undergraduate degree.

He reaffirmed Athlone Institute of Technology’s commitment to giving its students every possible opportunity to succeed - ultimately ensuring the continued prosperity of the Midlands region - and told students that the institute would waive fees for those interested in attaining a master’s degree by research or a PhD and offer them a yearly stipend to cover their living expenses.

Athlone Institute of Technology is a vibrant, contemporary institution distinguished by academic excellence in teaching, learning and research. The institute has enjoyed considerable success in recent years, most notably being named The Sunday Times 'Institute of Technology of the Year 2020, 2018 and Runner-Up in 2017. The institute also tops Ireland's official league table for research and has been listed in U-Multirank's 'Top 25 Performing Universities in the World for Interdisciplinary Research' in 2018 and 2019. Athlone Institute of Technology is ranked number one for student satisfaction nationally for the sixth consecutive year with its students rating their educational and student experience as excellent.