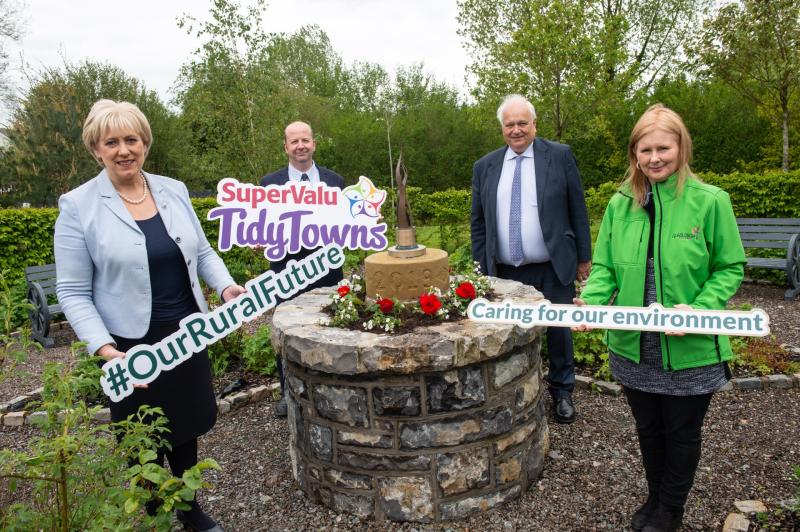 The Minister for Rural and Community Development, Heather Humphreys TD, has announced the return of the SuperValu Tidy Towns Competition.

The iconic competition was cancelled in 2020 – for the first time in over 60 years – due to the Covid-19 Pandemic.

But special arrangements have now been put in place to ensure the return of the competition this year, with the overall winners due to be announced before the end of the year.

The 2021 SuperValu Tidy Towns competition will take place in the same format as previous years, albeit with a specific emphasis on electronic entry and remote adjudication of each town’s entry.

Groups should continue to adhere to public health guidelines as they have done so remarkably well since the onset of the Pandemic.

The health and safety of volunteers continues to be paramount.

It is acknowledged that volunteers have not been able to deliver on all of the plans that they may have had for their towns, and the competition adjudicators will be mindful of this fact when assessing entries.

At the same time, many groups have still been very active and the standard of competition is expected to be high again this year amongst the almost 1,000 Tidy Towns groups around the country.

Above all, staging the competition this year is a recognition of the extraordinary contribution volunteers continued to make to their communities, even during the Pandemic itself.

For this reason, Minister Humphreys has introduced a new award category aimed at groups that have continued to serve and look after their communities despite the difficulties posed by COVID-19.

The Minister has also introduced a special prize for young people, which was committed to under Our Rural Future – ­the Government’s ambitious new strategy for Rural Ireland.

Minister Humphreys announced a €1 million fund in December to further support the Tidy Towns Groups across the country.

Today, the Minister confirmed that over 800 Tidy Towns Groups have now been awarded grants of up to €1,000 under this Fund

Speaking in Glaslough, Minister Humphreys said: “Missing out on the competition last year was very disappointing for everyone associated with Tidy Towns. That’s why I am delighted to announce that this iconic competition is back.

“I am sure the thousands of volunteers around the country are relieved that we have finally reached the point where we can launch the 2021 SuperValu Tidy Towns competition and are excited for the months ahead.

“While the last year has been so challenging for everyone, I know that so many Tidy Towns volunteers the length and breadth of the country have continued to look after their communities.

“Many groups have been unable to deliver on the projects they had planned due to COVID-19.

“That will not impact in any shape or form on this year’s competition and I am encouraging each and every one of the 987 registered groups across the country to enter once again.”

Also speaking about the launch today, Ian Allen, Managing Director of SuperValu: “This year marks 30 years of SuperValu’s continuous support for and sponsorship of the national TidyTowns competition.

“As one of the longest-running community and sustainability initiatives in Ireland, Tidy Towns is an incredibly important programme that all of us at SuperValu are immensely proud to be a part of.

“At its heart, Tidy Towns is the public expression of the work countless individuals undertake to make our communities better places in which to work and live.

“Following a year like no other, this year’s competition is about recognising work of volunteers who have continued in every way possible and collectively help to lift the mood of the nation.”

The Minister continued: “Tidy Towns is not just a competition. It demonstrates everything good about our people – volunteerism, positivity, working together, community spirit, protecting our environment, that sense of pride in looking after the place you call home.

“This is a really special day. I want to pay tribute to the huge role played by Tidy Towns groups in inspiring vibrant communities and generating a spirit of volunteerism in towns and villages across the country – qualities that are at the core of “Our Rural Future”.

“I am also pleased to include a special award this year for young people involved in Tidy Towns which is a specific recommendation contained in the Government’s strategy for Rural Ireland. I would also encourage local groups to continue their great efforts at promoting and enhancing biodiversity in our local towns.

“Tidy Towns volunteers are rightly proud of their locality – their efforts make towns and villages the length and breadth of the country better places to live and to visit.  For years, Tidy Towns volunteers have shown great resilience and determination - even more so over the past year as our communities came together in the face of adversity.

“In recognition of this, we have also introduced a special award to recognise the contribution that Tidy Towns groups have made to their communities in response to the COVID-19 pandemic, including as part of the COVID-19 Community call.

“As we look ahead to an outdoor summer and staycations, we want our local towns and villages right across the country to be attractive, welcoming places. The trojan work carried out by our local Tidy Towns volunteers will be central to achieving that. My message is clear - Tidy Towns is back this year and it is bigger, better and more important than ever.”

Minister Humphreys concluded: “I value the role my Department plays in this competition. I want to also commend the competition sponsor, SuperValu, for their continuing support and enthusiasm in raising awareness of the competition. Now in their 30th year of sponsorship, through their nationwide network of retailers, SuperValu have helped the competition to become the best known sustainable and environmental initiative in Ireland.

“Finally, I want to encourage all groups to continue to adhere to the public health advice and I wish all the volunteers the very best in this year’s competition.”

Further details on the competition and access to supporting resources are available at www.tidytowns.ie