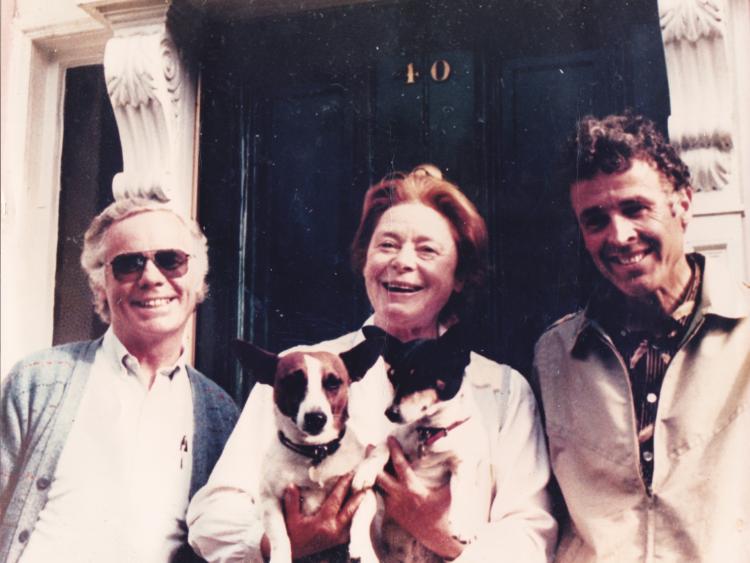 Acclaimed actress and American Theatre Hall of Fame inductee Siobhán McKenna never forgot her Longford roots and she is pictured in 1983, during a visit to her mother’s birth place, in Colmcille, north Longford, with Fr Michael Doyle and Johnny Creegan

It was Johnny Creegan from Crott, Dromard, one of Longford’s finest historians, who first told me of Siobhán McKenna’s connection to Colmcille and county Longford.

Siobhán McKenna was born in Belfast on May 24, 1923. Her parents were nationalists and she was brought up with Irish as her first language.

Her Father Eoghan McKenna was a native of Millstreet county Cork. Her mother was Margaret ‘Gretta’ O’Reilly from Aughakine, Colmcille, county Longford. Margaret’s parents were Eugene Reilly and Anne Corcoran. Anne was a sister of Sean Connolly’s mother Margaret. So, Gretta was a first cousin of the famous rebel leader, Séan Connolly who died at Selton Hill in March 1921.

When Siobhán was a school girl she spent her summers with her grandmother Anne in Aughakine.

The family moved to the west when Siobhán was still young, after her father secured a lecturing job in what was then UCG. She attended the Dominican Convent in Galway and St Louis Convent in Monaghan.

In the years that followed, she studied at University College Galway, she went on to be closely associated with theatrical work with the Taibhdhearc and Druid companies.

Her first major role was in George Bernard Shaw’s ‘St Joan’ in which she portrayed Joan of Arc, and this led her to international stardom.

In 1943 she joined the Abbey Theatre Group. In 1946 she married the Dublin born actor Denis O’Dea, they had one son Donnacha.

In 1947, she made her debut on the London stage in ‘The Chalk Garden’. She reprised the role on Broadway in 1955, for which she would receive a Tony Award nomination for "Best Actress in a Leading Role, Drama".

In 1956, she appeared in the Cambridge Drama Festival production of Saint Joan at the Off-Broadway Phoenix Theatre. Theatre critic Elliot Norton called her performance the finest portrayal of Joan in memory.

Her popularity earned her many plaudits including her image on the cover of Life Magazine in September 1956.

Although primarily a stage actress, Siobhán appeared in a number of made-for-television films and dramas. She also appeared in several motion pictures such as King of Kings in 1961, as the Virgin Mary. In 1964, she performed in Of Human Bondage and the following year in the blockbuster Doctor Zhivago.

President Cearbhall O Dalaigh, invited her to become a member of the Council of State in 1975, an honour which she accepted.

In 1979 she appeared in the title role of Roald Dahl's, The Landlady, an episode of the very popular British TV series 'Tales of The Unexpected' where she played a seemingly charming maternal if eccentric landlady who subsequently murders her tenants and adds them to her collection of stuffed creatures.

She never forgot her Longford roots, and in 1983 she returned to her mother’s birth place, Colmcille, to support work on the restoration of the famous Latin School in Moyne.

Her final stage appearance came in the 1985 play Bailegangaire for the Druid Theatre Company.

One of the many awards she received in her lifetime was the gold medal of the Éire Society of Boston, for promoting awareness of the cultural achievements of the Irish people.

Siobhán McKenna died on November 16, 1986, and she was buried in Rahoon Cemetery, Galway.

Two years after her death, she was inducted into the American Theatre Hall of Fame, in 1999 a stamp with her image was issued by An Post.