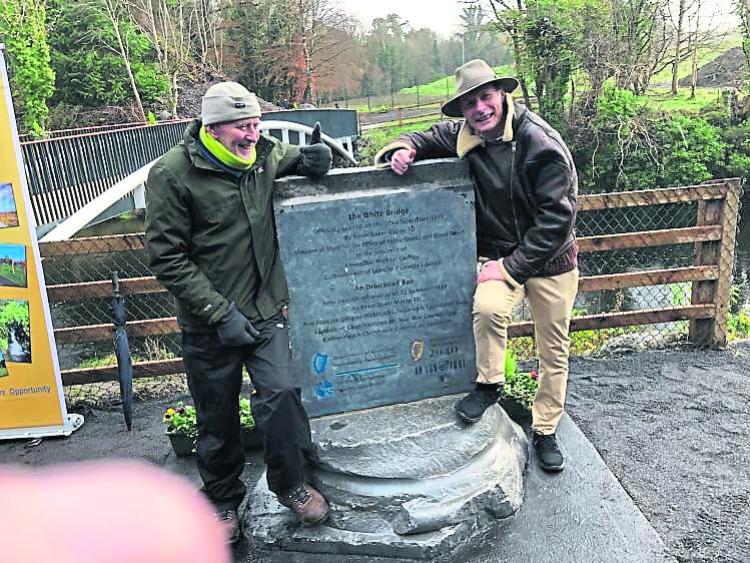 The late Frank Small (left), proudly posed beside the plaque at the White Bridge in Newcastle Woods last November. Frank did a lot of work to get the bridge reinstated. Pictured with Donall Mac An Bheatha

Frank was a great lover of nature and put a lot of his time and effort into ensuring the beautiful amenity that is Newcastle Woods was used to its full potential.

“He was a gentleman and a shockingly nice man,” said Cllr Pat O’Toole paying tribute to his friend.

“He had a great interest in the local community and area for as long as he lived here. He’ll be very sorely missed.”

Always a thorough gentleman, Frank worked with the Athlone Training Centre and was hugely interested in Technology.

Himself and his wife Mary moved to Newcastle some years ago and immediately made a huge impact in the community where he became very much involved.

He had a great love of the environment and was very involved in the development of the new walks and the White Bridge in Newcastle Forest, a great amenity to the district.

“The things he did are to everyone’s benefit,” said Cllr O’Toole.

“When Center Parcs mentioned putting pathways in, they mentioned the Church Walk and the Wandering Walk, which have been popular walks for years.

“They were completed and it’s a testament to people like Frank. He would have kept at them to keep them in the planning - and the White Bridge too,” said Cllr O’Toole.

“He persevered and kept working with them. He contributed so much to the community and it won’t be forgotten.”

Frank was a very kind neighbour and a former Chairman of the Ballymahon Text Alert service and was loved by many in Ballymahon and surrounding areas.

Frank will be deeply missed by his loving wife Mary, his children Mark and Vicky, grandchildren, his brother Billy and sister Marie. Fondly remembered by his loving nephews, nieces, extended family and friends.

A memorial service for Frank will be held at a later date. May he rest in peace.