CLICK THROUGH TO READ MORE: Dr Noonan of the Health Centre in Ballymahon named 'Establishing GP of the Year' 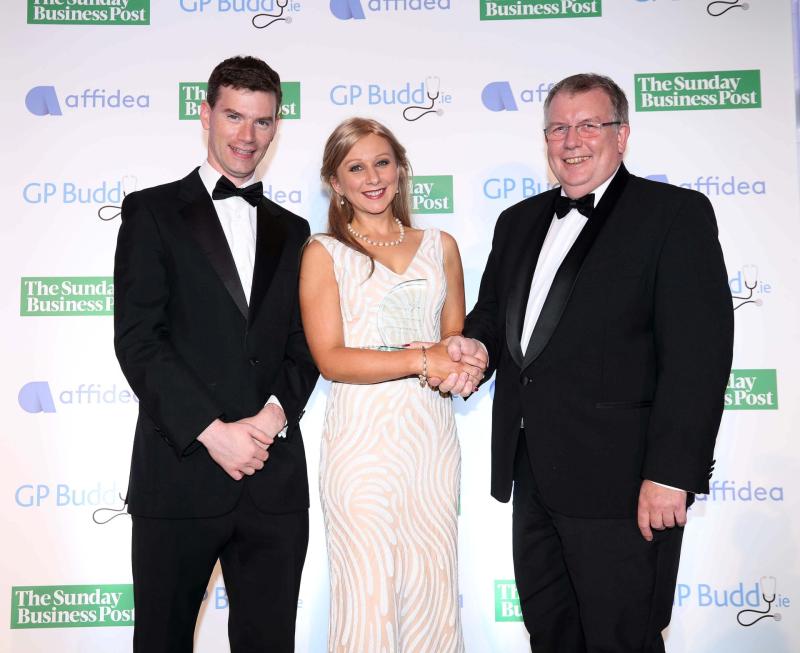 Dr Laura Noonan of the Health Centre in Ballymahon, Co Longford (centre) receives the Award for Establishing GP of the Year at the GPBuddy National GP Awards 2017, in association with Affidea, by Joe Newell, CEO,GPBuddy.ie and David Sharpe, Managing Director, Ionic.

Dr Laura Noonan of the Health Centre in Ballymahon, Co Longford has been named Establishing GP of the Year at the 2017 GPBuddy National GP Awards.

Dr Noonan took over a rural GP practice in Longford in August 2016 after the sudden death of the GP Principal.

She has dedicated the last year almost entirely to building a better service for her patients, while herself battling serious illness.

You may also be interested in reading: Over €80k raised for Ballymahon GP's life-saving treatment


She is also the current Director of the ICGP Network of Establishing GPs.

Now in their second year, the annual GPBuddy Awards, in association with Affidea, recognise excellence, innovation and collaboration among GPs all over Ireland.

The winners were announced at a gala ceremony on Friday evening hosted by television personality and GP, Dr Pixie McKenna, at Dublin’s Shelbourne Hotel.

Speaking at the event, Dr Shane McKeogh of GPBuddy.ie said: “GPs at all stages of their careers are caring for patients, families and communities. These awards are about recognising the unsung healthcare heroes among us, and the innovation and dedication that can often be taken for granted. Sincere congratulations to all of tonight’s deserving winners. We hope that this event will encourage GPs throughout the country to continue to innovate and inspire new ways of improving patients’ lives.”

As the first and only awards ceremony of its kind in Ireland, the GPBuddy Awards offer a unique opportunity to celebrate the dedication, commitment and innovation of Ireland’s GP community. This year’s judging panel, comprising experts from across the medical, healthcare, media and business sectors, received a record number of nominations across all 12 categories.

Tom Finn, CEO of title sponsor Affidea Ireland, commented: “Affidea is delighted to partner with the GPBuddy National GP Awards. At a time when the role of the GP continues to grow and adapt, it is our great pleasure to join in honouring the hard work and dedication of GPs and their practice teams all around the country.”

Dr Ryan completed the Cork GP Training Programme this year. As a dual-qualified GP and pharmacist, his final year project looked at implementing a national primary care prescribing formulary in nursing homes. In addition, he is medical officer for the Cork City Hospital Children’s Club, where he volunteers on a regular basis.

Margaret Malone is practice manager at the Thomas Court Primary Care Centre, based in Dublin’s Liberties area. She played a key role in the successful integration of the practice into its current multi-disciplinary setting, which involved both moving premises and introducing various new services.

Colette Gibbons joined her current practice in Louisburgh, Co. Mayo in 2004. She has since undertaken a huge workload and now provides many new services, which previously required patients to travel 40km to Mayo General Hospital.

Dr Flynn works as a GP in Hollyhill in Cork. He is a regular contributor to both local and national media, acting as an advocate for patients in the area. He is hugely active on social media, with a Twitter following of more than 4,000, and also hosts a local Facebook discussion once a week to discuss patient issues.

Drs Charlie and Evelyn McManus have dedicated the last two years to re-establishing and renovating Dunkineely Health Centre in Donegal. Since joining the practice, they have introduced specialised minor surgery clinics, alleviating patient waiting lists and travel time to the nearest hospitals. They are also planning monthly diabetic and COPD clinics in the near future.

This team from Trinity College Dublin carried out a study to successfully demonstrate a cost effective and time efficient opportunistic screening method for atrial fibrillation that is easily incorporated into everyday general practice.

Dr O’Leary is a GP trainer for 2nd Year trainees on the TCD GP Training Scheme. He is also a tutor to 1st Meds in Trinity College Dublin in their Human Development, Behavioural Science and Medical Ethics Course.

Led by Dr Kevin Tempany, the Vista Eye Clinic in Naas provides specialised Ophthalmological care to both public and private patients in a community setting. The clinic allows for patients to be seen, diagnosed and treated quickly, by skilled medical staff in modern, local facilities.

Dr Rawat is a GP at the Calderwood Family Clinic in Drumcondra and an assistant programme director on the North Dublin GP Training Programme. Over the last year, she has introduced an integrated health program at the practice, which incorporates Mindfulness Based Stress Reduction courses, Balint sessions, yoga and resilience building workshops. She has also extended the module to trainees on the North Dublin GP Training Programme.

Dr Noonan took over a rural GP practice in Longford/ Westmeath in August 2016 after the sudden death of the GP Principal. She has dedicated the last year almost entirely to building a better service for her patients, while herself battling serious illness. She is also the current Director of the ICGP Network of Establishing GPs.

Donegal-based husband and wife team Drs Evelyn and Charlie McManus were nominated by their patients for consistently going above and beyond the call of duty. They were acknowledged equally for their outstanding care to patients of all ages, and their utmost generosity of time.

Dr Kerin trained as a GP on the Limerick GP scheme.  He found his passion for General Practice in his Rural GP registrar year working with his mentor Dr Kieran Murphy from Athea. He went on to establish a new practice, Treaty Medical Centre in Limerick, with Dr Jason McMahon in 2012. His practice came to prominence when he appeared on the Brendan O’Connor TV show as he and his partner worked over 11 jobs in an effort to get it off the ground.  As of 2017, Treaty Medical Practice has eight staff with three GPs and a second nurse starting soon. Dr Kerin was elected President of the National Association of General Practitioners (NAGP) in 2016.